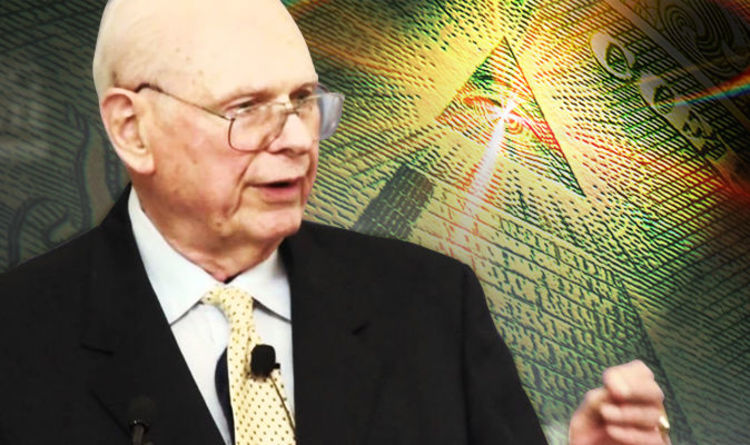 
Paul Hellyer, a former Canadian Minister of Defence, is believed to be the highest-ranking former politician to come out as a believer of the popular conspiracy theory.

As one of the world’s biggest conspiracy theories, the Illuminati is said to be a secretive global elite which runs governments from behind the scenes and is planning to introduce a New World Order (NWO).

Its key members are said to be drawn from Hollywood and world political and business leaders, with some even accusing its true leaders of being reptilian lizards from space.

Accusations vary in extremities from the simple implementation of the NWO as a goal at the least, to the Illuminati being a highly Satanic cult seeking to return the devil to earth.

Other than repeated claims by conspiracy theorists, which have ballooned in number since the growth of the internet, there is no actual proof the Illuminati exists at all.

However, in a podcast, Mr Hellyer, who was in post in the 1960s, said the Illuminati, at least at its most basic concept, was real and all powerful.

He said corrupt hidden leaders continue to wage needless wars and focus on profits, rather than stopping climate change.

Mr Hellyer claims the technology to reverse climate change has been developed, but it is supressed by the Illuminati, as most of its key members have big stakes in the fossil fuel industry which they wish to continue for as long as possible.

He said: “You have a got secret cabal that’s actually running the world and they’ve managed to keep this technology under wraps until they can cash in the trillions of oil assets that they’ve got.

“And it’s not going to change until hundreds of thousands of people band together and say look ‘you’ve got to come clean, tell us what is going on, and change your priorities to save the world for further generations instead of blowing it on wars’.”

Mr Hellyer joins the ranks of world famous conspiracy theorist David Icke, the former footballer and BBC1 Grandstand presenter, who came out as a so-called “truther” in the 1990s.

He describes the Illuminati as a cabal and the “Hidden Hand” in lectures across the globe.

However, before you decide to believe Mr Hellyer or not, it is worth knowing he also believes that several species of intelligent aliens are secretly living on Earth, and world leaders keep this secret from us, Dailystar.co.uk reports.

In fact, he claims it is aliens that have developed a “free clean energy source” that can reverse climate change, that has been given to us.

He added: “I learned way back that the US in cooperation with visitors from other planets had developed an exotic form of energy that would allow us to make the change from fossil fuels to exotic, clean energy within the 10-year deadline that I think we actually have.

“But nothing is being done about it.

“So this is not a good state of the world we’ve got.

“Certainly they are more advanced in agriculture and medicine and many other areas and if that’s true why aren’t we cooperating with them to build a better world.”

Many people subscribe to the free energy supression conspiracy theory, and that aliens are secretly living on Earth.

However, other than repeated accounts online there is no firm evidence to prove either of them.

Sceptics argue that if an endless, free power supply were available, business tycoons would develop ways to cash in on delivering the services, and would move away from fossil fuels.