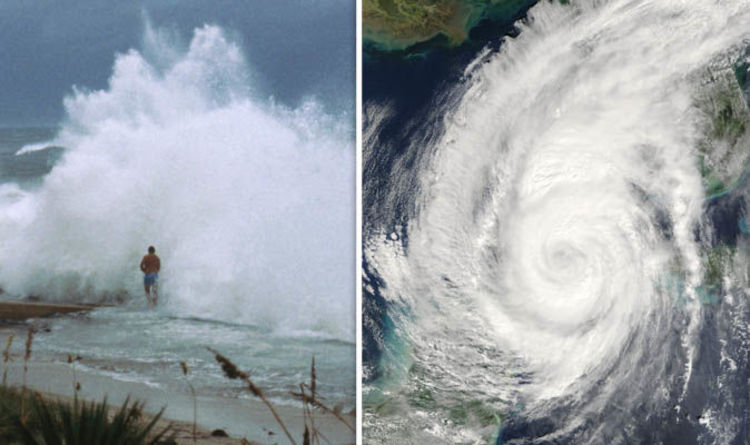 
When Subtropical Storm Alberto passed through the North Atlantic, the cyclone caused £37million ($50million) in damage in the Gulf of Mexico.

The storm’s development on May 25 kickstarted the North Atlantic hurricane season a week early.

But a team of scientists believe this is not a sign of things to come.

Weather experts at the University of Arizona (UA) predict hurricane activity this year will likely remain below the average median.

The news will come as a particular relief after the incredibly deadly 2017 hurricane season which left thousands of people dead across the US, Gulf of Mexico and Caribbean.

The UA researchers are now forecasting a total of four hurricanes and just two major hurricanes.

The forecast falls just below the median since 1980 of seven hurricanes and two major storms.

A report penned by Dr Xubin Zeng, an atmospheric scientist at Arizona University, and graduate student Kyle Davis, claims low temperatures over the Atlantic contribute to the forecast.

The report reads: “Although many signs would point to an average year, the Atlantic zonal pseudo stress is at one of its lowest values in the past 68 years.

“This is associated with reduced activity.

“Other years with similar levels include 2009, which had three hurricanes, and 1991, which had four.”

The 2017 season was the single most active since 2007 and the seventh most active hurricane season ever since 1851.

Two of the storms, Irma and Maria, grew to Category 5 while Harvey and Jose peaked at Category 4.

Category 3 hurricanes are enough to cause widespread “devastating damage” with wind speeds up to 129mph.

Category 5 hurricanes peak at 157mph or higher and are certain to cause “catastrophic damage” upon impact.

Earlier this month the Pacific hurricane season appeared to be in full swing with the development of Hurricane Bud off of the coast of Mexico.

The churning cyclone deteriorated to a Category 4 tropical storm within two weeks of Hurricane Aleta striking the area.

The US National Hurricane Centre (NHC) warned of lashing rain, intense winds and dangerous rip tides along the coast.

The hurricane slowly downgraded once it passed over cooler waters in the Pacific.

Oldest Known Dog Bone Hints Our Best Friends Were With Us Earlier Than Thought : ScienceAlert
A Strange Thing Happens to Wolves Infected by Infamous Mind-Altering Parasite : ScienceAlert
A Tobacco Plant Has Been Engineered to Produce Cocaine in Its Leaves : ScienceAlert
Colossal Exoplanet Is One of The Most Massive Super-Earths Ever Discovered : ScienceAlert
Alzheimer’s Gene Doesn’t Guarantee Dementia. Here’s What You Can Do to Reduce Risk : ScienceAlert