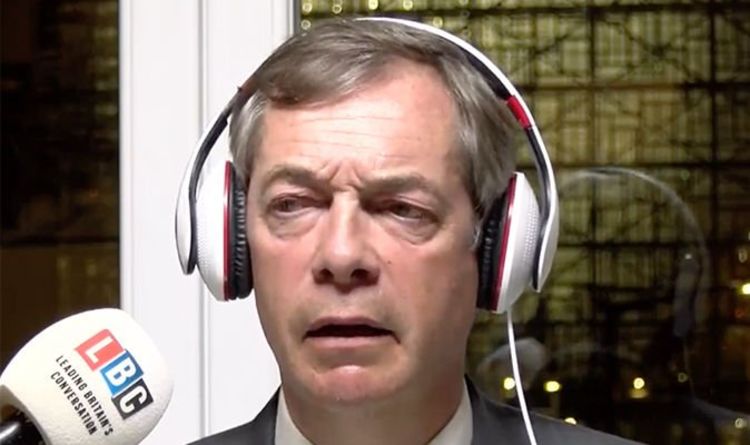 
A caller told Nigel Farage that he saw a UFO just a couple of miles from Heathrow Airport this morning, as reports of a drone halted flights from the runway late this afternoon. Sadish from Hounslow, which is approximately two miles from the airport, described the object as a “big white dot” with “two circles around another small circle in the middle”, and confirmed it was “definitely not very far”. Speaking on Nigel Farage’s LBC radio show, Sadish said: “This morning I woke up at 7am for the school run and I saw my friend. He was outside and he came in with his face all frightened, and I was like what happened to him, I thought maybe he’s not well.

“He said to me, that actually scared me, he said he has seen a UFO, and I was like you must be kidding, this morning?”

Sadish replied: “Yeah, and I’m like you must be kidding mate. He said if you don’t believe me come outside and have a look.

‘I went out and he showed me in the sky, from the door, I can see plain as day, and I saw the dot in the sky, a big one.

“It was a white colour and I’m like it’s not, then he asked me to take a picture and I’m like no I can’t be bothered. Then I stared at the star, I thought it’s a star probably, then I came in.

“Later on he showed me the pictures he took in the sky right, and zoomed in it actually looked like a UFO, two circles around another small circle in the middle.”

Mr Farage said dubiously: “I mean Sadish, I’m naturally a bit skeptical when I hear these things, I’m listening to you very carefully. How far away did it seem to be to you?”

Chaos ensued at the UK’s biggest airport at 5.05pm following reports of a drone sighting.

All departures were suspended, with thousands of passengers left stranded waiting to know if and when they would be able to get on with their journeys. Flights were resumed one hour later.

Upon announcing the closure of Heathrow, an airport spokesman said the airport was working with the Metropolitan Police and had stopped all flights as “a precaution”.

A spokesman for Heathrow Airport said: “We are responding to a drone sighting at Heathrow and are working closely with the Met Police to prevent any threat to operational safety.

“As a precautionary measure, we have stopped departures while we investigate. We apologise to passengers for any inconvenience.”

Astronomers Confirm The Earth-Sized Planet at Proxima Centauri Is Definitely There
Chimps Smack Their Lips in Rhythms Uncannily Similar to Human Language
Many Astronomers Now Think Planet Nine Might Not Exist After All, Here’s Why
Here’s How You Can Watch SpaceX’s Historic First Launch of NASA Astronauts Live
The Dinosaur-Killer Asteroid May Have Hit Earth at ‘Deadliest Possible’ Angle