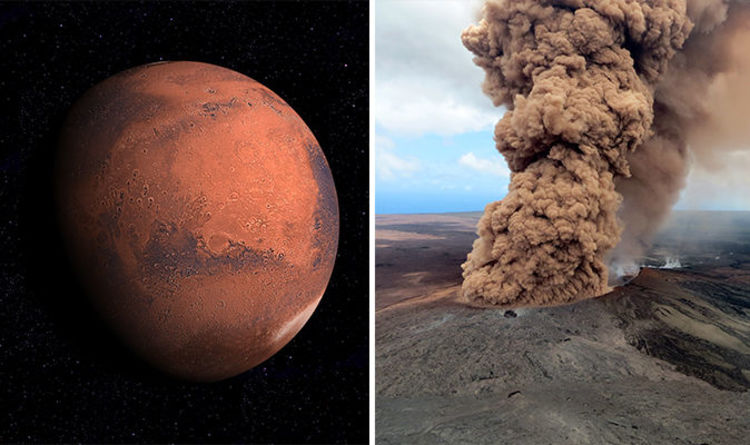 
A team of scientists have conducted fieldwork in the Kilauea fields since 2015 as part of a four-year Nasa-led research project.

One of the questions they are investigating is how life on ancient Mars could have developed.

Darlene Lim, a geobiologist at the Nasa Ames Research Centre in Silicon Valley and the project’s principal investigator, said: “The reason why there continue to be questions, and programs like ours that go out and try to answer the questions — was Mars habitable? Is it currently habitable? — is that nobody really knows.”

Basaltic terrain can host a huge range of microorganisms which led the scientists to investigate Hawaii.

Some of the chemicals on basaltic rock could provide energy for bacteria.

Scientists have even found bacteria more than 4,000 feet deep in volcanic rocks in Hawaii.

This means some life-forms can and do live in seemingly inhospitable environments similar to Mars.

Dr Lim’s team is also testing gear and operational systems that astronauts could use during potential future missions to Mars.

The doctor also said the team were also exploring how astronauts on Mars should transmit their findings back to Earth due to a communications delay.

The delay is called “planetary latency” and can be anywhere from four to 22 minutes.

Dr Lim said: “You can’t have an infinite amount of data pumped between both planets.

Scientists with the project say their research will be published later this year in Astrobiology, a scientific journal.

The project is just one of several in an around Hawaii’s volcanoes which have potential interstellar applications.

Another Nasa-funded research study is where teams of people live in isolation for months at a “Mars-like” site on Mauna Loa volcano – which is close to Kilauea.

The study was designed to gauge how humans deal with boredom.

A geologist at the University of Hawaii at Manoa, Scott Rowland, said: “They have to pretend that they can’t go outside without donning rather cumbersome suits.”

Mummies With Golden Tongues Discovered in Ancient Egyptian Necropolis : ScienceAlert
It Sounds Crazy, But Walking Backwards Is Really, Really Good For You : ScienceAlert
Earth’s Oxygen Came From an Unexpectedly Deep And Hot Source, Study Suggests : ScienceAlert
Crocodiles Seem to Be Thriving in a Toxic River That’s More Like a Sewer. Here’s Why : ScienceAlert
Astronomers Spot The Biggest Galaxy Ever, And The Scale Will Break Your Brain : ScienceAlert