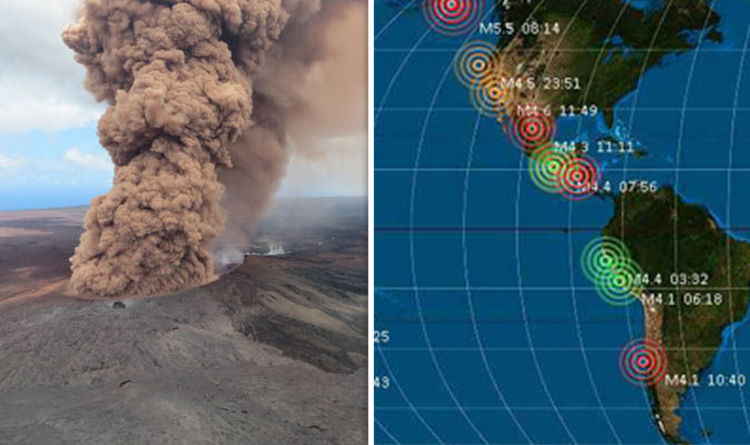 
The volcano started sending out fountains and rivers of lava on Thursday and on Friday the island was hit by a magnitude 6.9 earthquake.

Since Thursday, Kilauea has opened 12 volcanic vents and new fissures and vents opened overnight in the Leilani Estates, where lava leapt up to 230ft (70m) into the air.

Leilani Estates is about 12 miles (19km) from the volcano.

Activity has subsided but the Hawaiian Volcano Observatory (HVO) said the drop-off in activity from the eruption is “likely only a pause in activity.”

High levels of volcanic gases, including sulfur dioxide are still coming from the fissures.

The observatory said in a statement: “This morning, two new fissure segments broke ground. The first opened in a forested southwest of Leilani Estates about 9.30am and was active for only 3 hours.

“By 3.15pm, both new fissures were in active but the west end of fissure 10 was steaming heavily.”

Hundreds of people have been ordered to leave their homes on the eastern side of the Big Island in the wake of Kilauea’s eruption.

A total of 35 structures, mostly homes, have been destroyed by by lava flowing from the eruptions, officials said.

Further earthquakes have hit the volcano in the days following and on Tuesday, May 8, a total of 62 earthquakes shook the coast of Hawaii at various magnitudes – the first one was recorded at 12.04am (HST).

What other earthquakes have hit today?

It is not just Hawaii’s Big Island which has experienced earthquakes today.

According to Volcano Discovery, there have been a total of 123 earthquakes measuring less than magnitude 2.5 in the last 24 hours.

The largest earthquake was a magnitude 4.5 quake which hit the west coast of California just before 5am.

There were no reports of injuries or damage to buildings, but residents took to social media to report the tremor had woken them up.

Other countries to be hit today include El Salvador where a magnitude 3.7 earthquake hit at 2.22pm BST.

A magnitude 4.1 was recorded by the United States Geological Survey, 9km north-east of Intipuca, El Salvador.

Further magnitude earthquakes were recorded in Afghanistan and Central Chile, both at around 11.40am BST.

An earthquake deemed as moderate was recorded 287km east-southeast of Kodiak, Alaska at 9.14am BST – it measured 5.5 on the Richter magnitude scale.

An AI Found an Unknown ‘Ghost’ Ancestor in The Human Genome : ScienceAlert
Octopus Brains Evolved to Share a Surprising Trait in With Our Brains : ScienceAlert
10 Days After Its Launch, Orion Has Successfully Entered Lunar Orbit : ScienceAlert
Do You Need to Drink Eight Glasses of Water a Day? It’s Complicated : ScienceAlert
The Science Behind Why You Sprain Your Ankle So Often, And What You Can Do About It : ScienceAlert