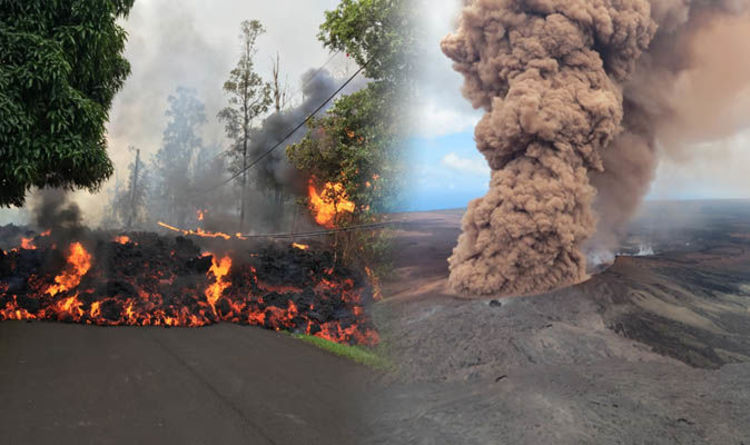 
Emergency crews area were poised to evacuate more people from Hawaii’s Big Island as fissures have continued to spread from the erupting Kilauea volcano.

Fountains and rivers of lava have been sent metres in the sky.

Shocking pictures from Big Island show red-hot rivers of lava destroying acres of woodland and homes and steam rising from cracks in streets in the Leilani Estates Subdivision.

Aerial images show lava engulfing huge swathes of the residential area of Big Island and grey smoke billowing up from the molten lava.

The Hawaii Civil Defense said 35 structures including at least 26 homes have been destroyed by lava flows.

A total of 12 fissures have formed, including two further more on Monday.

The U.S Geological Survey said: “The intermittent eruption of lava in the Leilani Estate subdivision in the lower East Rift Zone of Kilauea Volcano continues.

“The location of activity today was focused on the southwest portion of the area.

“This morning, two new fissure segments broke ground. The first opened in a forested southwest of Leilani Estates about 9.30am and was active for only 3 hours.

“The second opened about 12.20 between older fissures 10 and 11. By 3.15pm, both new fissures were in active but the west end of fissure 10 was steaming heavily.”

Eruption temperatures can be as hot as 2000 degrees Fahrenheit.

All 1,700 residents of Leilani Estates, as well as nearby Lanipuna Gardens, were ordered to evacuate due to dealing volcanic gases.

“This is not the time for sightseeing. You can help tremendously by standing out of the area.”

A magnitude 6.9 earthquake struck the island on Friday and the area has endured an average of one earthquake per hour since.

Kilauea has been erupting continuously since 1983 and is one of the most active volcanoes in the world.