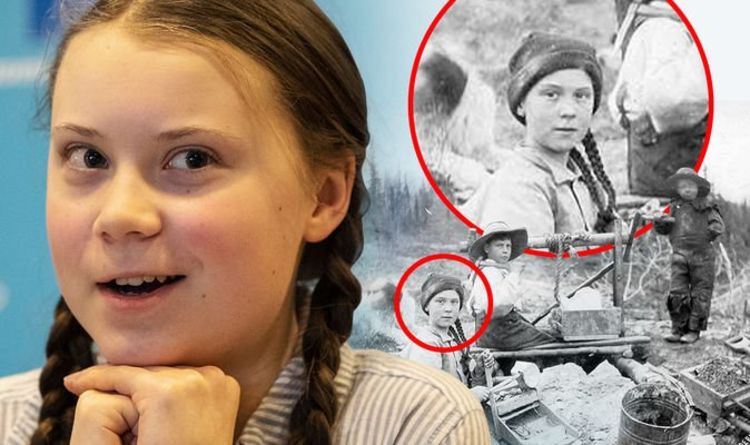 Greta Thunberg is the 16-year-old Swedish environmental activist on climate change whose campaigning has gained international recognition. Now a photo, taken approximately 105 years before Ms Thunberg’s birth, has come to light – featuring a girl bearing an astonishing likeness to the climate campaigner.

Self proclaimed UFO hunter Scott Waring took to his etdatabase.com blog to speculate wildly about the verified image, found at the University of Washington’s digital collection.

Waring wrote: “A YouTuber named Art Alien has a theory why Greta Thunberg is so successful in spreading her global warming messages worldwide.

“He even found an old photo that looks like it was taken over 120 years ago and it has Greta Thunberg in it!

“This would explain why a child is speaking at the United Nations and how she become world famous almost overnight.

Children of the Klondike area of Yukon Territory, Canada, sitting with their dog by a street sign, circa 1890 (Image: Getty)

“Its even possible she is an alien from an advanced species trying to stop the destruction of humanity.”

The photograph can be found at the University of Washington’s digital collection and is captioned  Three children operating rocker at a gold mine on Dominion Creek, Yukon Territory, ca 1898.

The white dog in the background and boy on the right have blurred faces, due to moving while the image was captured.

But it is the girl on the left who is the most captivating, due to her almost identical resemblance to Greta Thunberg – down to the pair of plaits over her left shoulder.

The YouTuber conducted research on this photograph using the text reading Klondike YT in the bottom right-hand corner.

He said: “The girl in the left-hand side of the black and white picture bears an uncanny resemblance to Greta Thunberg.

“Now, of course it isn’t hear, but people are going absolutely wild because it looks so much like the environmental activist.

The alien life conspiracy theorist proceeds to explain he released the photo as a “social experiment to see how people would react”.

He said: “A lot of people have commented how it is proof of reincarnation or proof of time travel.

“But it is simply proof Greta possesses very generic features.

“It may even turn out this girl, who lived 120 years ago, is related to Greta Thunberg.

“We don’t know anything more about any of the children in the photo, but Greta could be a distant relative of her.

“It also goes to demonstrate how the public are hypnotised by certain faces in the press and in the media, and they go crazy when they see anything that does not quite fit or match what they have been told.

“A lot of people have reacted quite weirdly to this, but it only goes to show how there are a finite number of facial types.

“If you have something of a similar age, sex, build and race, they may well look pretty similar.”

He added how on 25 percent of comments on Facebook claim the photograph has been faked using image manipulation.

The majority of comments on Scott Waring’s YouTube channel, which hosted Art Alien’s video believed the photo really is proof of time-travelling.

Marc Marparran wrote: “I feel sure she must have travelled back in time to another time when the climate was not so affected by man-made emissions.

And Billy Krzemien added: “Amazing likeness … a time traveler? … She possibly could be.”