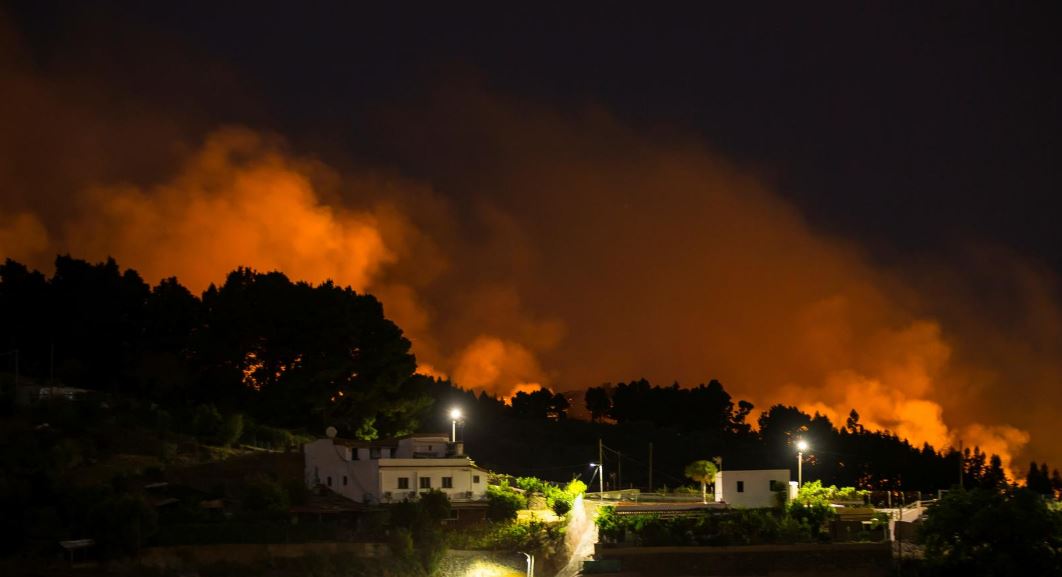 
A wildfire sweeping across Gran Canaria in the Canary Islands led to the evacuation of 4,000 people on Sunday.

And officials warned tackling the blaze was being complicated by a combination of high temperatures, strong winds and low humidity.

The Canary Islands, a group of seven major volcanic islands that extend for almost 300 miles (500 km) east to west about 60 miles (100 km) off the coast of northwest Africa, are well-known for their disastrous eruptions.

But right now, residents of Gran Canaria aren’t threatened by slow moving lava, but by a wildfire raging out-of-control.

As reported by Reuters, a dangerous wildfire, which started on Saturday close to the town of Tejeda, is advancing on two fronts in a mountainous area of the island. Around 1,700 hectares have been burned and 11 roads have been closed.

The fire is not contained nor stabilized or controlled.

Ten planes and helicopters, as well as around 700 firefighters on the ground including about 200 from the military, were battling the blaze. Three more planes are on their way to the area.

An emergency has been declared for nearby cities of Moya and Tejeda as officials say the blaze has a “great potential” to spread.

Evacuations extended to at least 40 towns in the vicinity of Valleseco.

Tejeda was evacuated last week because of an earlier wildfire, which burned at least 1,500 hectares (3,700 acres) of field and low forest in the same area.

The island was experiencing temperatures close to 40°C (104°F), humidity levels below 30% and strong winds, which usually provide what experts call the “perfect storm” for virulent wildfires.

Astronomers Have Detected Molecular Oxygen in Another Galaxy For The First Time
Locust swarm approaching Egypt sparks Bible apocalypse fears: ‘We are in the last days’  | Weird | News
Life after death: Terrifying NDE accounts recall dark void in first moments after death | Weird | News
This Legend of a Volcano Erupting 37,000 Years Ago May Be The Oldest Story on Earth
We’ve Vastly Underestimated How Much Methane Humans Are Spewing Into The Atmosphere