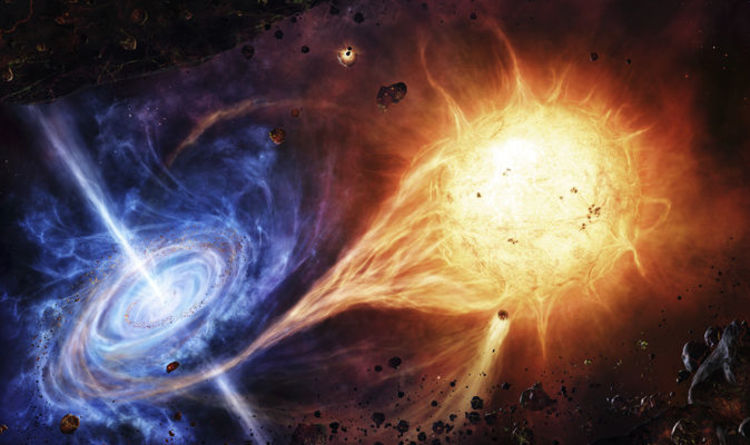 
When the Higgs Boson was discovered at the Large Hadron Collider, scientists said that it completed the Standard Model.

The Standard Model is a theory in particle physics that dictates how all of the particles in the universe interact, and the Higgs Boson, also known as the God Particle, was deemed necessary to give mass to other particles.

The discovery of the Higgs Boson in 2012 validated generations’ worth of physicists theoretical work.

Without Higgs Boson, scientists claim, mass would fundamentally not exist.

However, experts believe that the mass of the Higgs Boson will eventually change leading to the end as we know it.

But experts say in the distant future, the mass will eventually change, and when it does it will alter the mass of every particle in the universe.

This will lead to the destruction of everything in the universe.

However, experts say that this will be a long time away – somewhere between 10 octodecillion years (one with 58 zeros after it) and 10 quinquadragintillion years (139 zeros).

Nonetheless, it will still be gruelling.

”Our sun will burn up and many things will happen in our solar system before this is very likely to happen.”

However, while everything in the universe will be obliterated, this probably will not be the end of the cosmos itself as a sort-of shell will remain.

Prof Andreassen says: “I wouldn’t put my money on this being the end of the story.

“I would expect dark matter to come kick in and change the story.”

The FDA Just Approved The Most Expensive Drug in The World : ScienceAlert
Octopus Brains Evolved to Share a Surprising Trait in With Our Brains : ScienceAlert
People in Portland Planted Trees. Decades Later, a Stunning Pattern Emerged : ScienceAlert
Scientists Revived Ancient ‘Zombie Viruses’ Frozen For Eons in Siberia : ScienceAlert
Crocodiles Seem to Be Thriving in a Toxic River That’s More Like a Sewer. Here’s Why : ScienceAlert