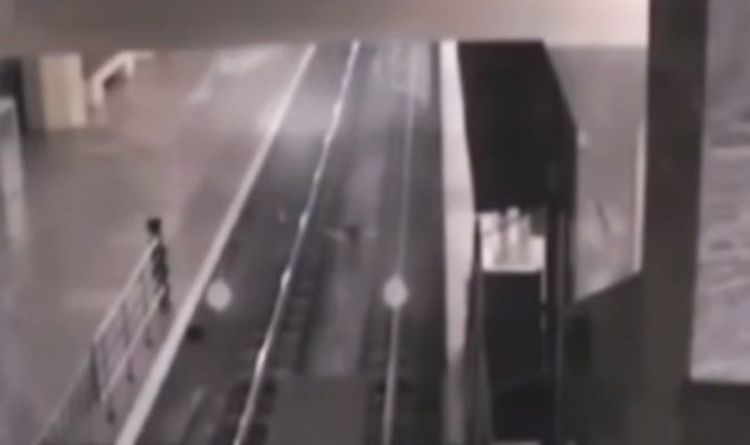 
It was then uploaded to YouTube paranormal channel The Hidden Underbelly.

The video description reads: “When the station’s security where watching the surveillance cameras they noticed this ‘ghost train’ pull into the station and stop as if it was picking up passengers before leaving.”

It has already racked up thousands of views.

Viewers were left arguing over what the phenomenon could be, Dailystar.co.uk reports.

Millions of people believe in ghosts across the globe, but there is no scientific evidence they actually exist.

They suggest we have a soul that lives on after we die and can some how be trapped in this world as an energy.

There appears to be no explanation as to why material objects such as trains or ships would continue their journeys as ghosts after being destroyed.

Whereas another viewer suggested: “Could be a parallel universe overlapping.”

Scientists believe there could be parallel universes due to the scale if the cosmos, but there is no way of entering between the two currently.

And a third even claimed: “It’s an invisible cloak meta material military experiment.”

Some conspiracy theorists suggest that governments use holograms to create effects such as this on the population to test their reaction to paranormal events.

There is no proof any such project has gone ahead.

However, several sceptics were inclined to believe it was either a reflection or two CCTV channels overlapping, creating the effect or just an out and out hoax.

Express.co.uk showed the footage to Scott Brando, a debunker who runs website Ufoofinterest.org.

He said it was an out and out fake video where two CCTV images – one with train and one without – were spliced together.

He also found the video had been used before as being in Moscow, Russia, not China.

He said: “Indeed here’s an old version of the same video published in 2012 and located in Polezhaevskaya, a train station of Moscow.

“I remember it was a fake, created in post-production (video editing) overlapping two different videos from the same security camera.”