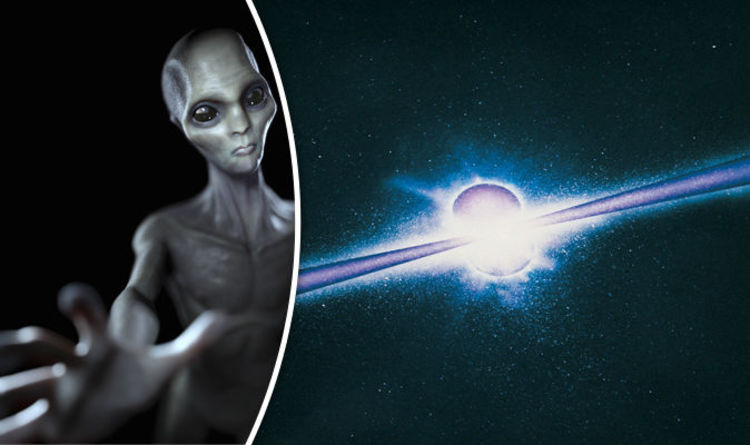 
The phenomena were thought by scientists to be an event which occurs when a massive star dies and implodes to form a new black hole.

However, some astronomers have different theories, and believe the intense explosions could be a result of alien activity.

The deep space eruptions only last for a matter of milliseconds, meaning that to transfer information would require an astonishing amount of energy.

But John A. Ball, an astronomer at the Massachusetts Institute of Technology (MIT) believes the gamma ray bursts are powerful enough to carry enough information.

According to Mr Ball, this is “comparable to the estimated total information content of Earth’s biosystem — genes and memes and including all libraries and computer media.”

“The temporal shape of the bursts at the transmitter is probably a simple pulse and the complex shapes that we see are due to distortions en route primarily gravitational lensing.

“So far as we know, gamma rays offer the widest practical communications bandwidth in the electro-magnetic spectrum and the only feasible way to send large quantities of information over intergalactic distances.”

Not only could the high energy explosions be information, the astronomer also hypothesises that they could actually be seeds of life.

Mr Ball said: “The messages in GRBs might be spores that thrive and multiply when they land in an appropriately nurturing environment.

“They propagate enormous numbers of spores and expect only a minute percentage to survive.”

Scientists Just Broke The World Record For The Most Powerful Stable Magnetic Field : ScienceAlert
Plants Have Been Keeping a Secret From Us About How Thirsty They Actually Are : ScienceAlert
For The First Time, Scientists Have Named a Heat Wave. Here’s Why It’s a Big Deal : ScienceAlert
Why Do Kids Get Worms, And What Can You Do to Prevent It? : ScienceAlert
Hidden ‘Hunger Stones’ Reveal Drought Warnings From The Past : ScienceAlert