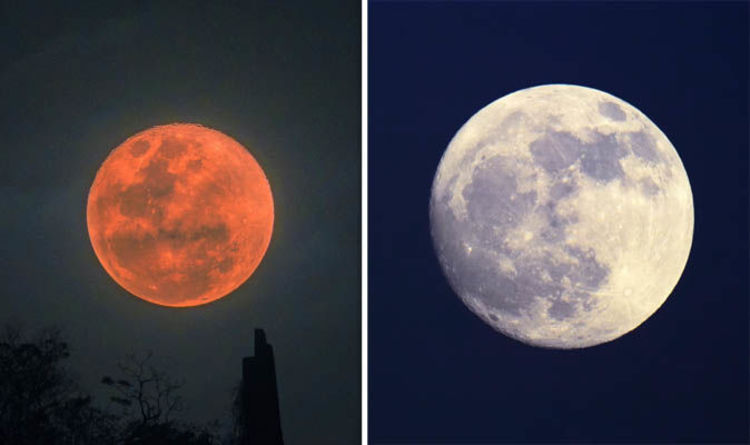 
The brilliant July Full Moon eclipse stunned stargazers around the world as it passed through the Earth’s shadow.

The lunar eclipse, dubbed the Blood Moon, peaked in the Eastern Hemisphere where it turned a deep-red colour.

The total lunar eclipse appeared on the night of Friday, July 27, and was the second eclipse of the Moon in six months.

The Moon is now in the waxing gibbous phase of the lunar cycle and is headed towards the spectacular Full Moon phase.

When is the next Full Moon?

The August Moon will be fully illuminated this month on the night of Monday, August 26.

On the night of the Full Moon, the lunar orb will be 100 percent illuminated by the Sun’s light.

This month’s Full Moon is known as the Sturgeon Full Moon or the Full Corn Moon in Native American tradition.

Each of the Moon’s 12 passes have a unique name denoting seasonal variances in the landscape and wildlife.

The Sturgeon Moon for instance, named by the American Algonquin tribes, signals the time is right to catch grown Sturgeon fish in the wild.

Once the Full Moon passes, the Moon will start to darken as the Earth’s shadow creeps over it from the right-hand side.

The darkening phase immediately after the Full Moon is known as the waning gibbous phase and will last until September 9.

On Monday, September 9, the Moon will entirely disappear for one night in the Earth’s shadow.

Will there be another eclipse this year?

The July Blood Moon was one of the most spectacular astronomical events of the year.

But hopeful sky-watchers will have to wait another five months before they get to re-live the phenomenon once more.

The July eclipse was the last lunar eclipse of the year and a partial solar eclipse on Saturday, August 11, was the final event of the 2018 eclipse cycle.

The next lunar eclipse will peak in the Western Hemisphere on the nights of January 21 and January 22, 2019.

This time around the Blood Moon eclipse will pass over the Westernmost parts of Europe, Africa and North and South America.

Next year we will also get to witness a total eclipse of the Sun on July 6.

On the day of the eclipse, the Moon will obscure the Sun from sight over the South Pacific and South America.

Totality will not be visible from the UK but Express.co.uk will keep you updated on the latest astronomical live streams of the event.

The Tonga Eruption’s 50 Million Tons of Water Vapor May Warm Earth For Months to Come : ScienceAlert
Does IQ Decline as We Age? One Type of Intelligence Peaks in Your Twenties : ScienceAlert
A Weird Blob of Hot Gas Is Whizzing Around Sagittarius A* With ‘Mind-Blowing Velocity’ : ScienceAlert
Early Puberty in Girls Surged in The Pandemic, And We May Finally Know Why : ScienceAlert
There Are New FDA Safety Warnings About Breast Implants. Here’s What We Know : ScienceAlert