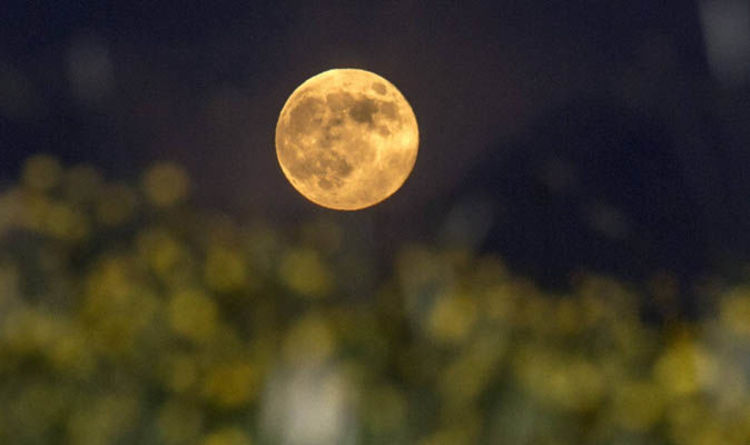 
The so-called Flower Moon peaked over the US horizon in the early hours of Wednesday before sailing across the sky to the UK by 3pm in the afternoon.

The May full moon, dubbed the Flower Moon by Native American Algonquin tribes, is said to usher in a time of fertility, warmth and blossoming flowers.

The Flower Moon is also known as the Mother’s Moon, Milk Moon, and Corn Planting Moon.

Skywatchers who missed out on the Flower Moon are in luck because the moon will likely still appear full for a day before it begins to shrink.

When is the next full moon this year?

The next full moon to peak in the night sky will rise towards the end of next month on June 28.

The so-called Full Strawberry moon will be the seventh full moon in this year’s cycle of 13 full moons – marking the midway point.

Much like the Flower Moon before it, the Strawberry Moon can thank the Algonquin tribes for its unusual name.

According to the Old Farmer’s Almanac, a staple guidebook on American astronomy, folklore and nature, moon phases were named to keep track of the changing seasons.

“Algonquin tribes knew this moon as the time to gather ripening strawberries.

“In places where strawberries aren’t native, this moon was also known as the Rose Moon and the Hot Moon.”

The June full moon has also been known as the Full Honey Moon.

How many full moons are there this year?

The moon will reach its full phase a total of 13 times this year, starting with the Wolf Moon on January 31 and ending with the December 22 Cold Moon.

Stargazers can typically expect 12 full moons a year, one for each calendar month, but once in a blue moon a second full moon will rise in the same month.

These astronomical anomalies are popularly known as Blue Moons – coining the phrase ‘one in a blue moon’.

In 2018, astronomers were treated to two Blue Moons in rapid succession – on January 31 and March 31.

Here is a list of all the named full moons this year:

Unusual Wasp Partnerships Help Non-Native Figs to Thrive in Hawaii
Scientists Think These Ridiculous Bones May Belong to New Largest-Ever Dinosaur
How to Have a COVID-Safe Car Ride, According to Science
Male Mantises Evolved a Vital Trick to Avoid Being Decapitated After Sex
Climate Change Could Shift Earth’s Tropical Rain Belt, Threatening Food Security For Billions