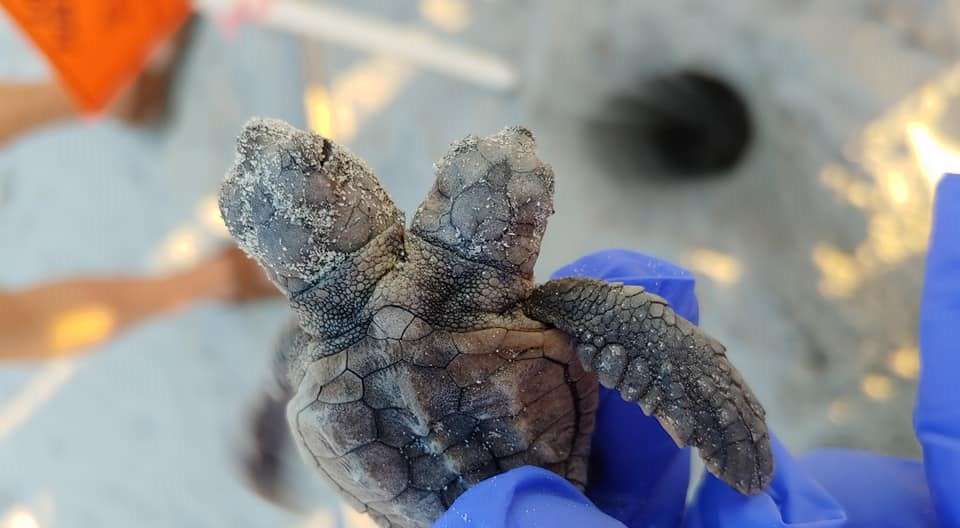 They were assessing the contents of a loggerhead turtle nest when, to their surprise, they found a little hatchling with two heads.

The discoverer did not collect the bicephalic hatchling to rear in captivity and instead released it into the sea.

The baby turtle was struggling to crawl due to its abnormally shaped shell and it’s unclear how well it will cope in the ocean as the survival rate of healthy hatchlings is low.

While having two heads is extremely rare, it is a little more common in reptiles than other animals.

This is because reptiles produce a large number of offspring and most of them lay eggs. These eggs are exposed to environmental conditions that might affect the development of the embryo inside.

Bicephaly can result from both genetic and environmental anomalies during an embryo’s development. Sometimes, an embryo splits in two (which is how identical twins form) but does so incompletely.

This is what causes conjoined twins in humans although it is incredibly rare for them to have two heads.

Meanwhile, sometimes two separate embryos can fuse together but only partially, resulting in the development of a two-headed animal.

Squirt and Crush had problems to move in the sand. Let’s hope little two-headed turtle will do better in water.

Study of 500,000 Medical Records Links Viruses to Alzheimer’s Again And Again : ScienceAlert
Dogs Can Be Aggressive For Lots of Reasons, And One of Them Is You : ScienceAlert
Intriguing Meteorite From Mars Reveals ‘Huge Organic Diversity’, Scientists Say : ScienceAlert
One Simple Idea Makes It Much Easier to Manage Your Weight Over Time : ScienceAlert
Newly Discovered Fossil Reveals Hundreds of Teeth ‘Never Seen Before in a Pterosaur’ : ScienceAlert