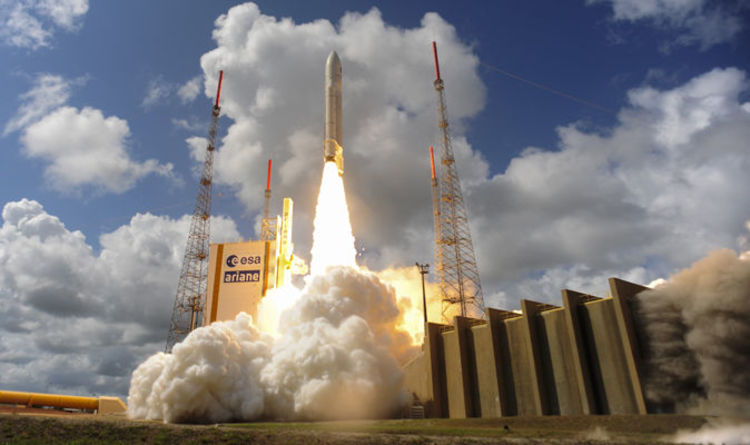 
A third station on Diego Garcia, in the Indian Ocean, is also a British Territory.

The UK could thus BLOCK the EU from using its territories for Galileo if Britain is kicked out of participating in the major GPS system – forcing a costly, time-consuming re-think.

The UK and the EU are still at loggerheads over Galileo, with Brussels it would “no longer be appropriate” for the country to be involved following Brexit next year.

This comes in spite of Britain contributing more than a billion pounds to the £8.5billion project.

However, Britain is biting back and saying that the EU will not be allowed to use its territories if the European Commission continues to try and shove out the UK from Galileo participation.

Key ground infrastructure systems for the Galileo system are located in the Falklands, Ascension Island and Diego Garcia which have receiving dishes in place there to boost Galileo’s global scope.

A Whitehall source said: “Galileo relies on a huge amount of British know how, as well as our territories all over the world.

“Trying to cut us out of it would backfire badly on the EU Commission.”

Website Get Britain Out looked to remind the EU they could be shooting themselves in the foot if they tried to boot the UK from Galileo.

It reads: “It is well worth reminding Eurocrats, key infrastructure for the programme is located on British territories, with the Falkland Islands, Ascension Island and Diego Garcia all being of upmost importance for the continuation the programme.

“By having dishes on these islands, Galileo is able to reach areas which would otherwise fail to be covered, allowing it to boast an extensive network.

“Losing Britain’s participation, and therefore the access to its territories, would be a crushing blow for a project, which is still underdeveloped.”

Ashley Fox MEP for South West England & Gibraltar, wrote on his blog: “I hope Member States may yet demand a change of approach as they see the threat posed to their economies, but we should be prepared for all eventualities and be confident of our ability to adapt.

“British expertise helped get Galileo off the ground. It will give flight to Brexit too.”

British companies have also said that they could consider walking away from Galileo if push comes to shove as they give their backing to the British Government.

A spokesman for QinetiQ, which helped with the development of signal receivers on Galileo, told Express.co.uk: “From our perspective, we are supporting the Government’s position.”

The Government is already looking at creating its own £4billion satellite navigation project if relationships continue to sour.

A recent study found that if the UK were to launch its own satellite system, it would bring in £3.7billion revenue and create up to 5,000 jobs, which QinetiQ would be happy to be involved.

The spokesman continued: “What we do is pretty specialised and unique and if the Government does decide to go for its own satellite, we are certainly in a position to help out.”

A ‘Wormhole’ Built on a Quantum Computer Teleported Information as Predicted : ScienceAlert
Lyme Disease Is on The Rise, But There Might Be Hope in a New Vaccine : ScienceAlert
Engineers Propose an Ambitious Plan to Bury Excess Carbon at The Bottom of The Ocean : ScienceAlert
Grim Study Shows 10 Years of ‘Carbon Offsets’ in California Had No Climate Benefit : ScienceAlert
Oldest Known Dog Bone Hints Our Best Friends Were With Us Earlier Than Thought : ScienceAlert