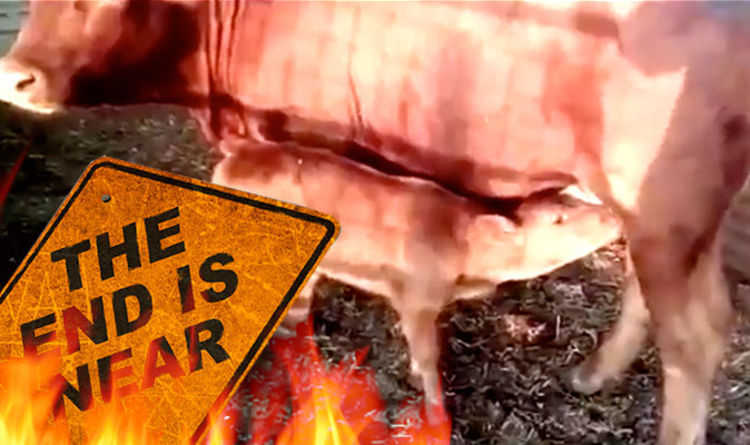 
A red heifer born in Israel late last month is being closely examined by The Temple Institute, a religious organisation based in Jerusalem, after it has been claimed the animal could fulfil a prophecy in the Jewish and Christian holy books.

Numbers, chapter 19 in the Christian Bible details how God told Moses and the Israelites to bring a “a red heifer without defect or blemish” which was to burned as part of a cleansing ceremony.

It is said the sacrifice of a red heifer is essential for the construction of a third temple in Jerusalem, which some theologians have claimed could bring about the return of the messiah and Judgement Day.

Very few candidates for the red heifer have been found and most have been disqualified due to blemishes or pregnancies, which is why the The Temple Institute has become so interested in this latest birth.

So far it is understood the heifer is pure red without any blemishes, however this could change as the animal grows.

The Temple Institute was setup in 1987 with its main focus being the rebuilding of the Holy Temple in Jerusalem.

On its website the organisation claims “the tenth red heifer will be prepared by the messiah”.

They also claim “there has been no red heifer for the past 2,000 years” adding: “If there are now red heifers – is ours the era that will need them?”

Sharing a video of the red heifer on YouTube, The Institute said: “One week after its birth the heifer underwent an extensive examination by rabbinical experts, who determined that the heifer is currently a viable candidate for the Biblical red heifer (para aduma) described in Numbers, chapter 19.”

The animal will then be examined again in three months time to see if it has developed any blemishes which would disqualify it.

The Institute said: “It will be examined again in three months time to determine whether it continues to possess the necessary qualifications for the red heifer, a necessary prerequisite for the renewal of the Divine service in the Holy Temple.

“The rabbinical experts who conducted the examination stress that the heifer, while currently bearing the required qualifications could, at any time in the future, become disqualified through natural causes, and therefore the heifer will be periodically reexamined.”