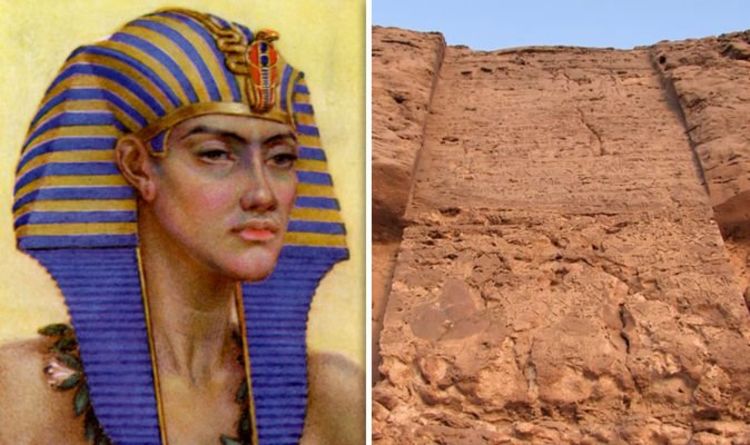 
Akhenaten, known before the fifth year of his reign as Amenhotep IV, was an Egyptian pharaoh of the 18th Dynasty who ruled for 17 years and died in 1336 BC. He is known for abandoning traditional Egyptian polytheism and introducing worship centred on the Aten, or sun disk – praising it as the creator, giver of life and nurturer of spirit. Akhenaten tried to shift the culture from Egypt’s traditional religion and built an entirely new capital city known as Armana, using new architectural techniques.

Barry Kemp, a British archaeologist revealed on Amazon Prime’s “Egypt new discoveries” how inscriptions within the mud-brick town reveal an apparent message from their god.

He revealed on the 2015 series: “The first act during the creation of Armana was the setting up the parameter of the site.

“This was done by carving into the cliff a series of tablets, followed by a number of statues of Akhenaten.

“They are written in first-person, one of them tells us exactly how Aten chose the place for Akhenaten and how important it was to be a piece of land never used before.

“In order to understand Akhenaten, you need to not only read the written sources, but how his religious vision chose the place of territory dedicated to the Aten.”

The walls of the city are also covered in inscriptions that apparently reveal projects the god wished to be developed.

A large temple devoted to the sun-disk was also created in the centre of the city, alongside a series of buildings.

The entire town reportedly took only a few years to build and numerous structures were uncovered in 1907 that clearly indicate the sheer size.

Mr Kemp also revealed why the site appealed to the ancient pharaoh so much.

He added: “He [Akhenaten] was attracted to the eastern side of the Nile.

“He was probably influenced by topography, which had sharply delineated valleys on the east side where the sun could rise and mimic the horizon.

“Here at Armana, the criteria are met.

“It is a clean desert site with no habitation and on the east, there is a valley entrance where the sun does rise.”

SpaceX Historic First Launch With NASA Astronauts Is Happening Right Now
Scientists Detect a Flickering Signal Coming From The Heart of Our Galaxy
A Possible Meteor Was Just Seen Exploding in The Sky in Turkey
Physicists Just Built The First Working Prototype Of A ‘Quantum Radar’
Astronomer Calculates The Odds of Life Emerging on Earth, And We May Not Be So Special