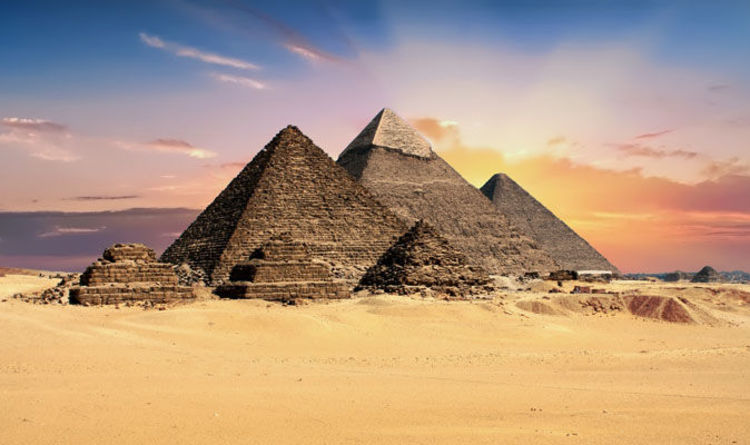 
The great pyramids are unique marks that reveal craftsmanship that we would be hard pressed to duplicate today. Various theories over the years have emerged which claim highly refined tools, techniques, and even mega-machines must have been used to build these structures. In a fascinating discovery scientists have found the core of the pyramids, at least at Giza, are made out of one type of limestone, according to the Netflix documentary ‘The Pyramid Code’.

And in another extraordinary discovery an expert – dubbed a ‘wisdom keeper’ – has found evidence the Egyptians knew how to conduct electricity.

John Burke, a biological engineer, revealed the type of limestone found in the core of pyramids is called dolomite, because it has got a high magnesium content.

The narrator explained: “They chose to sheathe the pyramid in the whiter turn limestone, which has almost zero magnesium content, therefore it’s a much poorer conductor of electricity.

“It’s closer to a pure calcium carbonate” which according to John Burke “is what all limestone is.”

John then explained it appears these pyramids have got a highly electrically conductive core wrapped with outer stones in what is effectively, an insulator.

Another question raised is why the granite in the passageways?

And will ionise or electrify the air. The air releases radon gas, which is radioactive.

“Granite is a not a dead stone. It’s alive,” claims Abd’el Hakim Awyan, an archeologist and wisdom keeper.

Now scientists wonder whether there may be some truth to the theories.

Did the ancient Egyptians design to the pyramids to keep an electrical charge present in those shafts?

Earth’s Oxygen Came From an Unexpectedly Deep And Hot Source, Study Suggests : ScienceAlert
Chilling Glimpse Into Our Future if We Survive Another Million Years : ScienceAlert
Crocodiles Seem to Be Thriving in a Toxic River That’s More Like a Sewer. Here’s Why : ScienceAlert
Oldest Known Dog Bone Hints Our Best Friends Were With Us Earlier Than Thought : ScienceAlert
Mysterious Tendrils Inside The Brain May Control Our Perception of Time : ScienceAlert