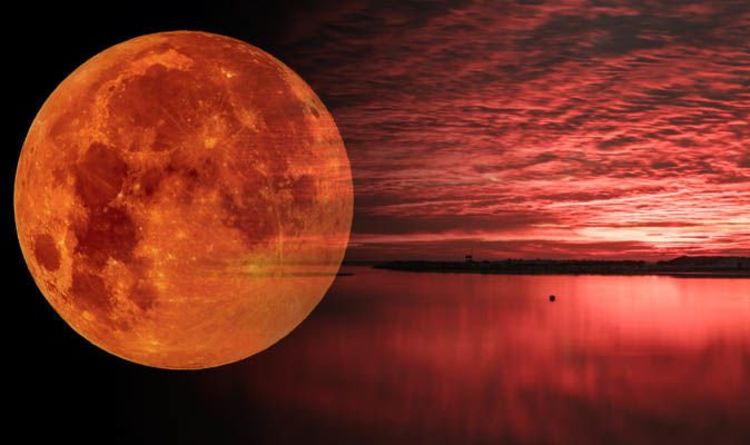 The January 21 total lunar eclipse will bathe the Moon in a deep and ominous red glow – an alleged portent of calamitous events. The so-called Blood Moon will peak over the United States for more than one hour but will be visible from South America and parts of Europe and Africa. Blood Moon eclipses typically rise once or twice a year but this particular one is being touted a sinister forewarning of the Christian apocalypse. Doomsday preacher Paul Begley, an evangelical preacher from Indiana, believes the Blood Moon is an unmistakable prophetic sign.

The preacher said: “Blood Moons, blood rivers – could be a bloody time. What?”

In pastor Begley’s opinion, a number of earthquakes and bodies of water turning red all around the globe in the last 10 days are evidence of biblical prophecy coming to fruition.

The Christian conspiracist who studies holy scripture for evidence of Christ’s Second Coming fears humanity is now living in the end times.

Eclipse 2019: A prominent Christian preacher fears the Blood Moon is a sign of doom (Image: GETTY)

He said: “Blood Moons and blood rivers – the last days are here folks, it is true we know a Super Blood Moon is coming this month, January 20 to 21.

Blood Moons, blood rivers – could be a bloody time

“The swamp is going to have to face God’s prophetic voice, there is no way around it, and as that’s going on, also, rivers are already turning blood-red.

“They happened in three different areas. There were two different rivers turning blood-red in Africa, one river turned blood-red in Indonesia and one in Papua New Guinea and this is in the last 10 days.

“So, I mean, now this makes 40-times the water has turned blood-red around the world since the lake in Texas – the OC Fisher’s Lake in San Angelos, Texas – when that lake turned blood-red back in July 31 to August 1, 2011.”

There are at least three mentions of the Moon taking on a blood-like hue in the final days of mankind in the Bible.

The Blood Moon references are found in the prophetic Book of Joel, the Book of Acts and the Book of Revelation.

A passage in Revelation 6:12 reads: “And I beheld when he had opened the sixth seal, and, lo, there was a great earthquake; and the sun became black as sackcloth of hair, and the moon became as blood.”

Pastor Begley believes this is undeniable evidence of the January Blood Moon’s role in the world’s demise but scientists, however, dismiss it as a peculiar effect of atmospherics.

On the night of the Blood Moon, the Earth’s lunar companion will pass directly in front of the Earth and the Sun and fully dip into the Earth’s shadow.

In the shadow, known as the umbra, refracted sunlight scattered around the edges of the Earth will fall onto the Moon and light it up.

The scattering effect dubbed Rayleigh Scattering filters out certain bands of light on the visible spectrum leaving red to illuminate the glowing orb.

Space agency NASA explained: “As the Moon passes into the central part of the shadow, called the umbra, it darkens dramatically.

“Once it’s entirely within the umbra, the Moon appears a dim red due to sunlight scattered through the Earth’s atmosphere.

“In fact, if you watch the eclipse from the surface of the Moon, you’d see the Sun set behind the entire Earth, bathing you in a warm red glow.”

Blood Moon eclipses typically peak once or twice a year and are always followed and preceded in two weeks by partial eclipses of the Sun.

For The First Time Ever, Scientists Have Created Hexagonal Salt
There’s Now Strong Evidence That an Exotic Type of Matter Exists Inside Neutron Stars
Largest And Oldest Maya Monument Ever Found Discovered Under Mexico
Astronomers Just Narrowed Down The Source of Those Powerful Radio Signals From Space
The First Known Interstellar Comet Might Survive Our Solar System After All