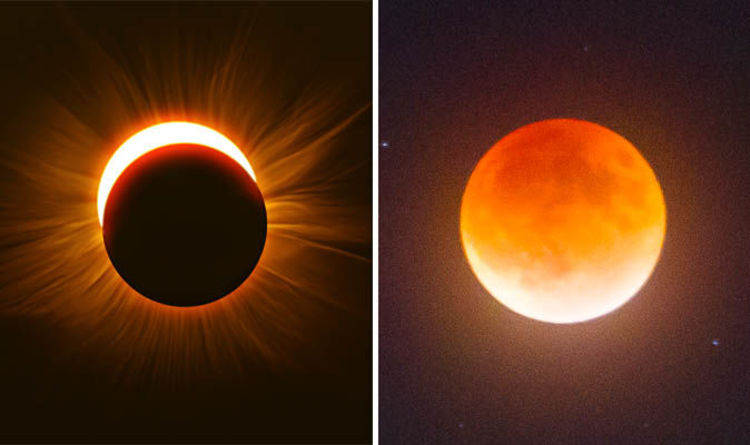 
An approaching blood moon next month promises people will be able to see a rare astronomical event, and the first of the year for the UK.

Earlier this year in January, a super blood blue moon appeared to the USA, but sadly was not visible in the UK.

The event combined the already rare blood moon with a super moon – caused when the moon is at the point in its orbit that is closest to earth.

In comparison, the last solar eclipse in the UK was in 2015, and next month’s lunar event will be the most significant since then.

The next lunar eclipse is the occasion of the blood moon next month on July 27.

The eclipse will be visible in the UK, South America, Europe, Africa, Asia and Australia.

The latest eclipse promises to be 40 minutes longer than that of the previous one in January, with a total of one hour and 43 minutes duration.

What is the difference between a solar and lunar eclipse?

To create both a solar and lunar eclipse, the earth and moon must be specifically positioned in relation to the sun.

For a solar eclipse to occur, the moon must be placed exactly between the earth and sun in one location, blocking the sun’s rays from hitting a portion of the planet.

There are two types of solar eclipse – partial and solar – with partial eclipses blocking the sun less, resulting in a brighter sky than a total eclipse.

The result of a total eclipse is seeing the moon as a black sphere in front of the sun, which may only be viewed via special glasses.

A lunar eclipse is a case of the sun being blocked again, but for the moon rather than the earth.

Lunar eclipses happen when the earth is between the sun and moon, and our planet casts a shadow on the moon, which would generally make it disappear.

The red glow which comes from a blood moon is the result of a lunar eclipse, when the sun is filtered through the earth’s atmosphere instead of blocked in a phenomenon named Rayleigh scattering.

The red and orange bands in the spectrum are least affected, the primary cause of a sunset and the deep red or orange glows of a lunar eclipse.

Anyone who is holding out for a total solar eclipse may be out of luck unless born very recently.

The next total solar eclipse will not be visible in the UK until 2090, but there will be partial eclipses before then.

A little bit less of a stretch, stargazers will be happy to know that the next solar eclipse is on August 1 this year, visible from the northern coast of Scotland, Orkney and Shetland.

For a list of upcoming astronomical events see here.