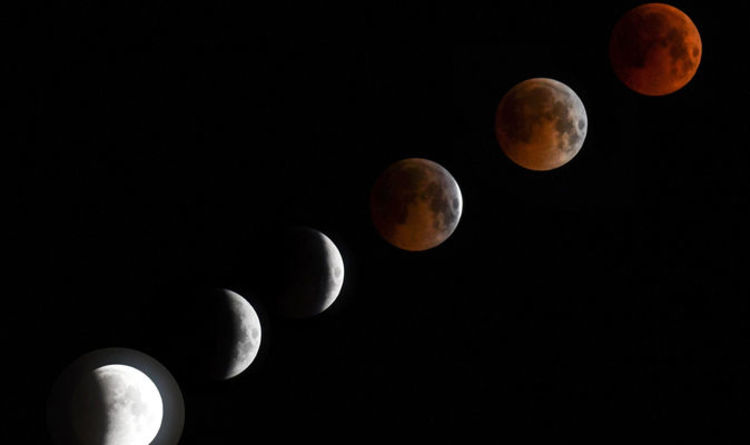 
Lunar eclipses occur when the Earth’s shadow blocks the Sun’s light, which otherwise reflects off the Moon.

There are three types are lunar eclipse – total, partial and penumbral.

Lunar eclipses can only take place at full moon, and the most dramatic form is a total lunar eclipse, which is when Earth’s shadow completely covers the moon.

These only occur when the Sun, Earth and Moon are perfectly aligned – even a fraction out of sync means the event will only be a partial eclipse and not a total eclipse.

According to NASA, two to four solar eclipses occur each year, while lunar eclipses are less frequent.

“In any one calendar year, the maximum number of eclipses is four solar and three lunar,” the USA-based space agency said.

During an eclipse, the Moon could turn a brilliant copper or red colour.

This happens when light from the sun passes through Earth’s atmosphere and is bent toward the moon.

“The exact colour that the moon appears depends on the amount of dust and clouds in the atmosphere,” according to NASA scientists.

“If there are extra particles in the atmosphere, from say a recent volcanic eruption, the moon will appear a darker shade of red.”

The most lunar eclipse, which was also a total lunar eclipse know as a Blood Moon, took place on July 27, 2018.

Totality lasted one hour and 43 minutes with additional partial eclipsing bringing the whole event up to nearly four hours.

The next lunar eclipse will happen on January 19, 2019 and will be a total eclipse.

The celestial event will be visible from North and South America, Europe and Africa – meaning we have a good chance of seeing it here in the UK.

The partial eclipse will be visible from South America, Europe, Africa, Asia, Australia – meaning the USA will miss out on the spectacle.

Moon gazers won’t have long to wait before the next incredible celestial event, however.

The August 11 partial eclipse will be the final eclipse of the year also concluding a brilliant trio of eclipses in rapid succession this summer.

This eclipse will rise in the northernmost reaches of the planet with limited visibility expected to extend to Scandinavia, Greenland, Iceland, parts of Canada and Asia.

There will also be a partial and annular eclipse of the Sun on January 6 and December 26 respectively.

‘Dark Data’ Is Leaving a Huge Carbon Footprint, And We Have to Do Something About It : ScienceAlert
We Just Got Our Closest View of Europa in 20 Years, And We Can’t Stop Staring : ScienceAlert
‘Unbelievable’ Video Shows 2 Bees Working Together to Open a Soda Bottle : ScienceAlert
3 Major Aquatic Animal Groups Can Trace Their Lineage to This Ancient Armored ‘Worm’ : ScienceAlert
Narwhals Are So Weird, Scientists Used Chaos Theory to Explain Their Behavior : ScienceAlert