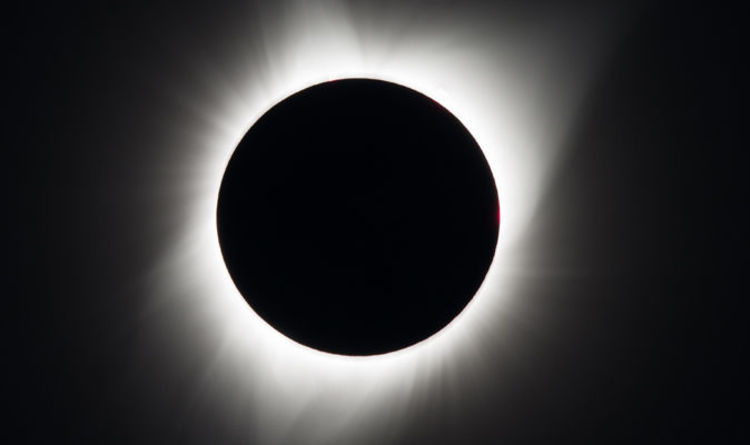 
The August partial solar eclipse will take place on the morning of Saturday August 11.

It is expected to be visible across the northern hemisphere, from northern Europe all the way across to eastern Asia.

Globally, the eclipse will last about three hours and 30 minutes from start to finish, on the dayside of Earth.

A solar eclipse – like the one expected this Saturday – occurs when sunlight is blocked by the moon.

During a total solar eclipse the sun is completely hidden by the moon.

But during a partial eclipse such as the one to come on Saturday, only part of the sun is obscured.

The partial eclipse will be most visible to people in North/East Europe, North/West Asia, North in North America and the Arctic.

In the UK, mid-morning will be the best time to catch a glimpse of the rare event.

For stargazers in London, the eclipse will begin at 9:02am and is expected to peak around 10:46 am.

This partial eclipse will be most visible to people in North/East Europe, North/West Asia, North in North America and the Arctic.

On the other hand, a lunar eclipse – like the stunning blood moon seen in July – happens when the moon directly lines up with the sun and the Earth, which causes the earth’s shadow to fall on to the moon.

During a total lunar eclipse, when Earth completely blocks the sunlight, the moon can appear red or orange – known as a blood moon. This is what we saw last month.

The next lunar eclipse will take place on 21 January 2019, with the Earth’s shadow completely obscuring the moon for around an hour.

The total eclipse will be the last for a while, with another full covering not expected until May 2021.

However, there will be another partial eclipse in the same year, expected on July 16 2019.

Shimmering ‘Lakes’ Under The South Pole of Mars Might Be Something Else Entirely : ScienceAlert
3 Major Aquatic Animal Groups Can Trace Their Lineage to This Ancient Armored ‘Worm’ : ScienceAlert
Experts Estimate The Scale of The Nord Stream Pipelines Methane Leak : ScienceAlert
Amazing New Fossils Provide Earliest Known Traces of The Evolution of Our Jaws And Limbs : ScienceAlert
We Just Got Our Closest View of Europa in 20 Years, And We Can’t Stop Staring : ScienceAlert