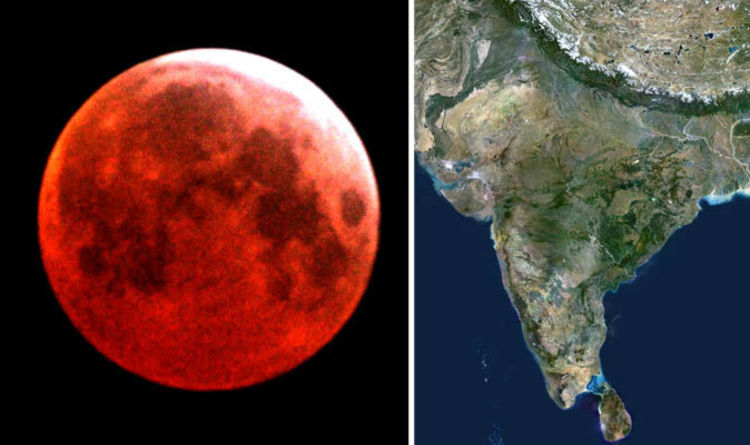 
Stargazers up and down the globe are ready for the July 27 to 28 total lunar eclipse and Blood Moon combo.

The July full moon will pass through the Earth’s Umbra, or darkest shadow, temporarily vanishing from sight.

But rather than disappearing completely, refracted sunlight in the atmosphere will paint the eclipsed full moon a deep red colour, giving birth to the so-called Blood Moon.

Scientists at NASA’s Goddard Space Flight Center estimate the total eclipse will last a whopping one hour and 43 minutes.

Clocking in at a total of 103 minutes, the July Blood Moon will be the longest total lunar eclipse between the years 2001 and 2100.

An additional hour of partial eclipsing before and after totality will bring the entire event up to around four hours.

When is the 2018 Blood Moon eclipse visible over India?

The eclipse will be visible over large swathes of the world, mainly from Eastern Africana and Central Asia, which puts India in the perfect spot to see the eclipse in its full glory.

Other countries in Western Africa, Europe, South America and Eastern Asia will still enjoy the eclipse but only from Moon rise.

By 1am IST on July 28 (9pm UTC or 10pm BST) the moon will turn completely red and hit Maximum Eclipse about 51 minutes later.

The full moon will then enter the final partial eclipse phase and leave Earth’s Penumbral shadow, returning to its usual self, at around 4.58am IST (11.58pm UTC or 12.58am BST)

Why will the moon turn red during the eclipse?

When the moon passes through Earth’s shadow, all sunlight which would normally illuminate the giant orb is cut off from sight.

But small amounts of light passing beside the Earth still manage to come through and bend around the Earth’s atmosphere to hit the moon.

The bending causes the sunlight to scatter and through a process known as Raleigh Scattering certain bands of short wavelength colours are filtered out.

“Some sunlight still reaches the moon, but first it goes through Earth’s atmosphere.

“The atmosphere filters out most of the sun’s blue light, so the moon looks red.”

The very same effect paints the skies blue and turns the skies orange during sunsets.