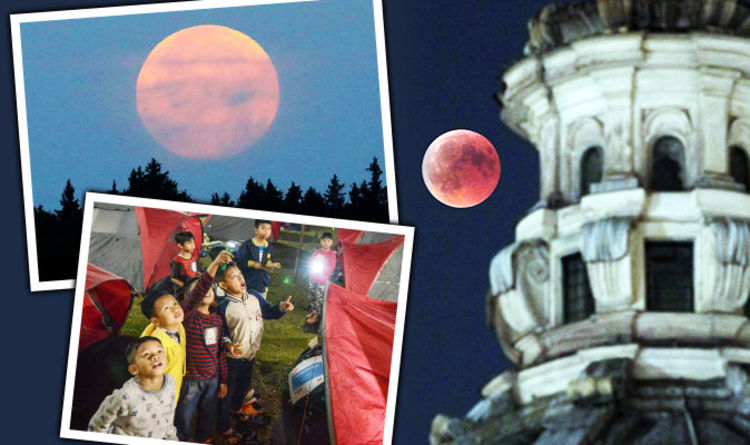 
From Russia to Sydney, Germany to Abu Dhabi, thousands of people witnessed a beautiful crimson globe as the full moon crossed the centre of the Earth’s shadow.

Unfortunately, skywatchers in the UK were left disappointed after huge storm clouds obscured the view a week after stifling temperatures had prevailed.

Many had to watch the night display on live stream.

The total eclipse one hour, 42 minutes and 57 seconds, NASA said, although a partial eclipse preceded this.

Lots of astronomers lined up telescopes along bays and hilltops throughout central asia to capture the lunar event, lasting four hours in total.

A stunning golden moon was pictured behind the Temple of Poseidon in Greece.

In Italy, the moon was spotted rising over the church of San Giuseppe Falegname while a shining orb was visible above the Chambered Castle in France.

Skywatchers in Sydney, Australia, were treated to a dazzling blood moon above the Sydney Harbour Bridge in a picture-perfect shot.

Hundreds paid money to watch the celestial display from the city’s observatory before sunrise.

The blood moon was even captured by astronauts aboard the International Space Station.

Astronaut Alexander Gerst tweeted: “A partially eclipsed Moon, with our neighbouring planet in the background, just before diving into Earth’s atmosphere. Just magical.”

What is a blood moon?

A blood moon is the name given to a lunar eclipse when the moon passes behind the Earth and into its shadow, completing aligning in the process.

Although sunlight is blocked out, some is refracted around the Earth and falls onto the moon’s surface.

In the process, some of the colours are filtered in a phenomenon known as Rayleigh Scattering.

July’s lunar eclipse coincided with the lunar apogee when the moon is furthest away from the Earth in its monthly orbit, meaning it takes longer to cross its shadow.

Unlike solar eclipse, lunar eclipses are visible with the naked eye and people do not need to wear eye protection.

There is quite a long wait until the next lunar eclipse which happens on January 21, 2019.

The good news for Brits is that they will be able to see that blood moon in its entirety – as long as there are clear skies.

Early Puberty in Girls Surged in The Pandemic, And We May Finally Know Why : ScienceAlert
There’s Trouble Bubbling Up in Newly Formed Alaskan Lakes, And Scientists Are Worried : ScienceAlert
JWST’s First Glimpse of Mars Reveals The Red Planet in a New Light : ScienceAlert
A New FRB Signal Has Buzzed Nearly 2,000 Times in Just Two Months, Raising a Mystery : ScienceAlert
One of The World’s Largest Organisms Is Disintegrating. Here’s How We Might Save It. : ScienceAlert