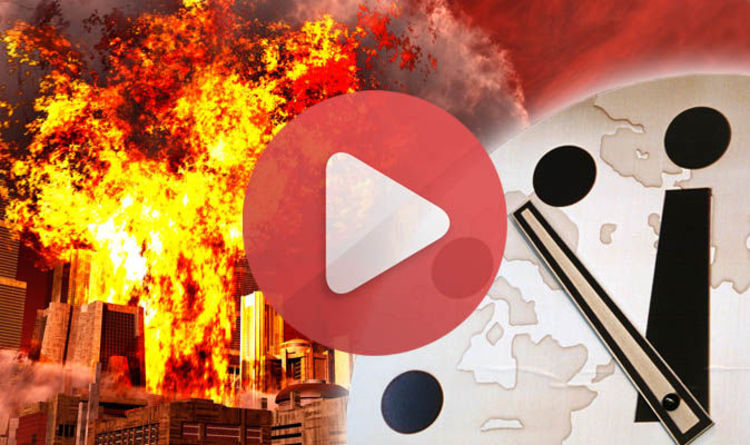 
Every year a group of concerned science boffins unveil the ominous Doomsday Clock – a hypothetical countdown to the end of the world.

Created in 1947, in the post-World War Two era of the atom, the symbolic clock takes into account the threat of nuclear war, climate change and other man-made means of destruction.

The closer the clock ticks to midnight, the closer humanity is to witnessing its painful demise.

Concern over whether The Bulletin of the Atomic Scientists could reset the clock closer to Earth’s final hour has risen in recent weeks and months.

The Doomsday Clock announcement will be streamed live later today, at 3pm GMT (10am EST), during an international press conference.

You can watch the conference online here, or visit the official Bulletin of the Atomic Scientists Facebook page live stream.

Express.co.uk will update this article with an embeddable video once the live stream is running.

Doomsayers are worried that North Korea’s rogue nuclear arsenal, widespread terrorism and the growing sophistication of robots could push the clock’s hand forward.

In 2017, the clock was reset to two-and-a-half minutes to midnight – the closest we have been to doom since the early 1980s.

Some of the cited reasons for the grave decision were the increasing effects of climate change, an increasing number of cyber attacks and US President Donald Trump’s brash language in the diplomatic arena.

Following Mr Trump’s inauguration in 2017, the clock was moved 30 seconds forwards and anti-nuke campaigners are certain it will move forward again today.

He told DailyStar.co.uk: “2017 was a bad year for the clock and portends a worse year with the distinct possibility of a catastrophe of global proportions.

“The gravest risk of all is the North Korea-US flashpoint, which worsened considerably over Kim’s long-range missile test successes and Trump’s response with ‘bloody nose’ planning.

“We are on a collision course that could crash in early to mid 2018 and escalate quickly from conventional to nuclear conflict, and possibly draw China into the conflict.”

Mr Blair added: “Overall the situation warrants moving the minute hand forward one minute toward midnight, possibly 1.5 minutes forward. That would put it at one or less minutes from midnight.”

The closest the clock ever came to striking midnight was in 1953 when the US and Soviet Union were both hellbent on developing the ultimate weapon of destruction – the hydrogen bomb.

The US successfully obliterated an island in the Pacific Ocean with an H-bomb in October 1952, followed nine months later by a Russian test of a similar device.

The Bulletin said at the time: “The hands of the Clock of Doom have moved again.

“Only a few more swings of the pendulum, and, from Moscow to Chicago, atomic explosions will strike midnight for Western civilisation.”