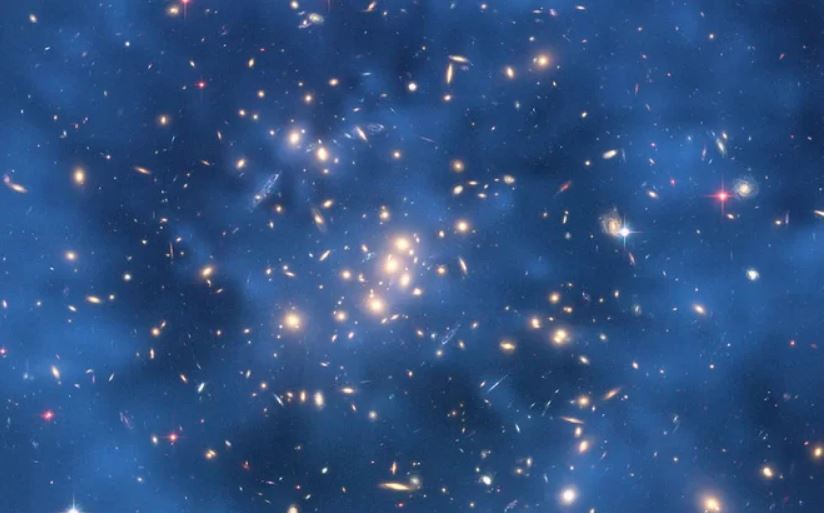 
About a quarter of the universe’s mass consists of a mysterious, unseen substance called dark matter.

And there’s a chance that one form of it could behave like tiny, high-speed projectiles, blasting through human flesh like bullets.

In fact, the dark matter impact would generate so much heat that it would tunnel through body tissue as a flesh-melting plasma plume.

That idea may sound far-fetched, but because dark matter can’t be directly observed, seemingly outrageous proposals merit careful consideration until they can be conclusively ruled out.

Most physicists hunting for dark matter are searching for particles smaller than atoms. But more-massive pieces of dark matter known as macroscopic dark matter, or macros, could lurk in the cosmos. In theory, macros could directly interact with physical objects such as human bodies, causing “significant damage,” according to the new study titled “Death by Dark Matter.”

Damage from such a collision would be comparable to a gunshot wound.

We know dark matter exists only from indirect evidence, as it exerts a gravitational pull on objects in the visible universe. Efforts to directly detect dark matter generally target individual particles and their interactions with ordinary matter, using sensitive machinery or massive atom smashers like the Large Underground Xenon (LUX) detector and the Large Hadron Collider (LHC).

Macroscopic dark matter, on the other hand, “is a composite of many, many particles,“ said the new study’s lead author, Jagjit Singh Sidhu, a doctoral candidate in the physics department at Case Western Reserve University in Cleveland.

“Macros could possibly have masses up to the size of a small planet,” Sidhu told Live Science. And while there are no firm theoretical grounds suggesting that macros exist at all, investigating them is still worthwhile, simply because there’s no definitive signal for any type of dark matter at all, Sidhu said.

In fact, cosmologists know just that dark matter feels gravity and clusters together, “and that’s about it,” Mandeep S.S. Gill, an observational cosmologist with the Kavli Institute for Particle Astrophysics and Cosmology in California.

Dark matter might be as light as an axion, a hypothetical particle many times smaller than an electron. The mysterious substance could also be as weighty as a primordial black hole — a hypothetical type of black hole that formed shortly after the Big Bang — “which can be several times the mass of the sun,” said Gill, who was not involved in the new study.

Exploring dark matter with any degree of precision has become possible only over the past few decades. Studies such as this one are important because they probe the frontier of what is already known about the enigmatic substance, Gill said.

“There are a lot of open questions. But we’ve made incredible strides in a couple of decades, and we’re going to keep making progress,” he said. “That doesn’t mean we’re for sure going to find a dark matter candidate, but I’ll bet we’ll know a lot more in 20 years.“

Orcas Are Contaminated With a Forever Chemical Associated With an Unlikely Product : ScienceAlert
Bigfoot Has a Very Simple Explanation, Scientist Says : ScienceAlert
Ultra-Processed Food May Exacerbate Cognitive Decline, New Studies Show : ScienceAlert
Astronomers Find What May Be a Habitable World 31 Light-Years Away : ScienceAlert
Wildfire Destruction in The Western US Has Doubled in Just 10 Years : ScienceAlert