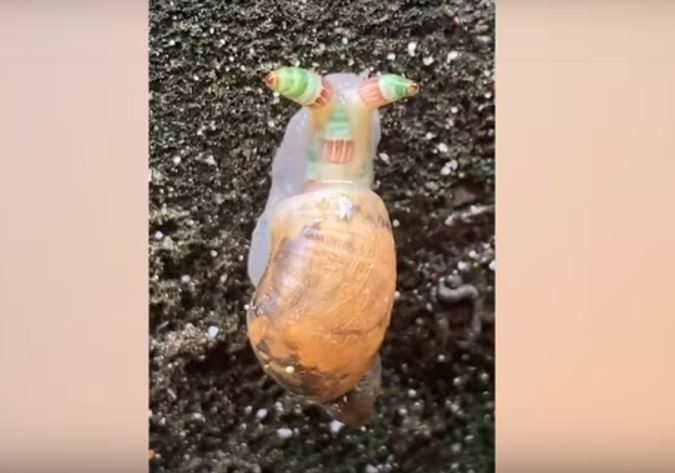 
This bizarre robot-like zombie snail with a neon appearance was seen crawling across a hillside Changhua County in Taiwan on August 9.

The snail was noticed because it looked like it had ”flashing lights” turned on inside it. But why is this mysterious creature glowing like a chameleon going out-of-control?

A hiker in Taiwan was mystified when he stumbled upon a strange snail that sported pulsating green and orange tentacles. The creepy-looking creature was spotted by a tourist whose visit came to a halt when he noticed something flashing on the ground.

And the footage is rather mesmerizing. No?

According to wildlife experts, the poor little snail had fallen victim to a parasitic flatworm that had seized control of its body and turned the creature into a colorful zombie.

The biologists further explain that the purpose of this strange phenomenon is to attract birds that will prey on the snail and thus ingest the parasite which will then be able to reproduce inside its new avian host, before being released out into the world and attack more disco-chameleon snails.