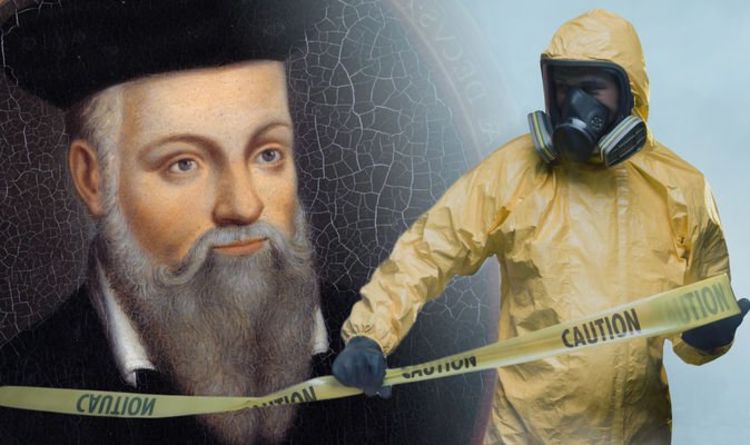 The coronavirus epidemic is sweeping through China like wildfire with an estimated 18 million people in three cities under quarantine. The deadly virus, which triggers pneumonia-like symptoms, was first detected last year in Wuhan City, Hubei Province.

But with an increasing number of coronavirus infections being confirmed outside of China’s border, concerns are growing for humanity’s safety.

Some have even bizarrely claimed the 15th-century writer and supposed prophet Nostradamus predicted the outbreak of a “great plague” in the future.

Twitter user Marco Malacara said: “The antichrist leading the White House, locusts, floods, flies, coronavirus. I think this is what Nostradamus was telling us about 546 years ago.”

Another person tweeted in Spanish, which translated reads: “The plague of the 21st century has arrived. A Nostradamus prophecy. We will die very soon. #coronavirus”

READ MORE: Coronavirus tracker: Where has deadly coronavirus been? Has it reached UK?

Did Nostradamus predict the coronavirus epidemic in China?

The Chinese viral outbreak began in December last year when a newly discovered strain of the coronavirus, Novel Coronavirus (2019-nCoV), was discovered in Wuhan.

The virus was initially traced to a busy seafood market and the number of infected has skyrocketed in the last week.

Coronavirus infections have since been confirmed in Thailand, South Korea, Japan, Australia and the US.

Online conspiracy theorists have now suggested the Michele de Nostradame, or Nostradamus, predicted the epidemic in the 15th century.

Nostradamus’ followers consider the man to be a powerful prophet and seer who predicted the Great Fire of London in 1666 and the rise of Adolf Hitler in 1933.

Nostradamus penned his supposed prophecies in the form of mystic passages known as quatrains.

The bulk of Nostradamus; quatrains were published in 1555 in his magnum opus Les Propheties.

The great plague of the maritime city, Will not cease until there be avenged the death

One of these quatrains, Century 2:53, could be a reference to the coronavirus, according to online claims.

The passage reads: “The great plague of the maritime city

“Will not cease until there be avenged the death

“Of the just blood, condemned for a price without crime,

“Of the great lady outraged by pretence.”

DON’ MISS
Can you treat coronavirus? How dangerous is it? [INSIGHT]
How serious is the China virus epidemic? Will the virus spread? [INTERVIEW]
Can wearing a face mask protect you from catching coronavirus? [ANALYSIS]

Coronavirus news: Did Nostradamus warn the world of a “great plague”? (Image: GETTY)

Hubei Province is a landlocked part of eastern China, so it is unlikely Wuhan is the “maritime city” mention by Nostradamus.

The disease was, however, traced to a seafood market, which could be a loose link to the quatrain.

Nostradamus mentioned another plague in Century 2:56.

The passage reads: “One whom neither plague nor steel knew how to finish,

“Death on the summit of the hills struck from the sky:

“The abbot will die when he will see ruined

“Those of the wreck wishing to seize the rock.”

Should you believe any claims about Nostradamus prophecies?

According to Brian Dunning, the author of the Skeptoid podcast, Nostradamus’ predictions require a great deal of hindsight to link to world events.

Mr Dunning said Nostradamus’ writings are grossly misrepresented and not genuine forecasts of the future.

He said: “Nostradamus’ writings are exploited in a number of fallacious ways.

The sceptic added: “Michel de Nostredame was truly one of the brilliant lights of his day, but to subscribe to false stories and urban legends is to disrespect who the man actually was.

New Telescope Images of Betelgeuse Reveal Details of Its Mysterious Dimming
Just Before Our Sun Dies, Its Light Will Shatter The Asteroid Belt to Dust
Scientists Discover Giant Viruses With Features Only Seen Before in Living Cells
UFO sighting: ‘Alien craft’ spotted not far from Area 51 sparks conspiracy claims | Weird | News
A Small Change in Airplane Altitude Could Reduce Climate Impact of Contrails by 59%