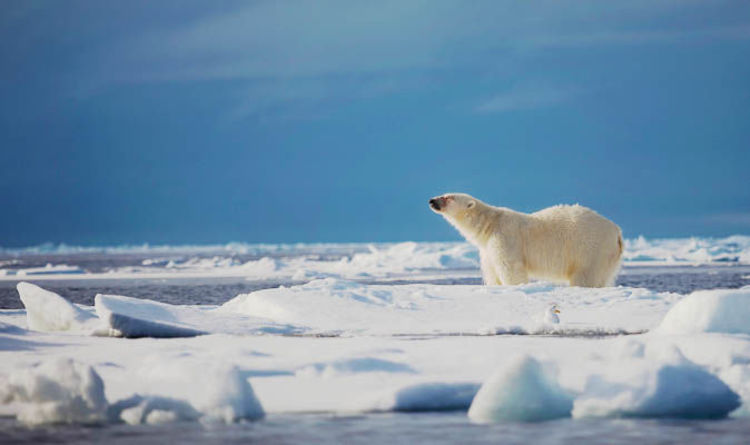 Although astrophysicists have long toyed with the idea celestial movements affect Earth’s climate, the study’s authors may have just produced the first concrete evidence.

The scientists now think the gravitational forces of Venus and Jupiter shift Earth’s round orbit into a more elliptical one in a regular cycle.

The cycle in turn produces hotter summers and colder winters with drier droughts across the globe.

Dennis Kent, plaeomagnetist at Columbia University’s Lamont-Doherty Earth Observatory, said: “There are other, shorter, orbital cycles, but when you look into the past, it’s very difficult to know which one you’re dealing with at any one time, because they change over time.

“The beauty of this one is that it stands alone. It doesn’t change. All the other ones move over it.”

The researchers came across this idea after drilling out a 1,500-foot-long piece of rock from Arizona’s Petrified Forest National Park and collecting samples from ancient lake beds in New York and New Jersey.

The collected samples contained evidence of ancient lakes drying up and refilling in a regular cycle for hundreds of thousands of years.

The effect of planetary movements on climate is known as the Milankovitch cycles – named after Serbian geophysicist and astronomer Milutin Milanković, who first presented the hypothesis in the 1920s.

And there could be good reason to believe both Venus and Jupiter have a profound effect on Earth’s climate and orbit.

Venus is the planet’s nearest interstellar neighbour, approaching at its closest point as close as 24 million miles away.

Jupiter, which is the biggest planet in the solar system, also extends its gravitational forces to our home planet simply due to its sheer size – it is 318 times more massive than Earth.

Dr Kent now suggested we are in the middle of Earth’s 405,000 period which means the orbital swing is likely not causing major climate disturbances.

He said: “It’s pretty far down on the list of so many other things that can affect climate on times scales that matter to us.”

Instead he stressed greenhouse gases are the main culprit behind the going climate change effects.

Scientists Glimpse Incoming Asteroid Just Hours Before It Makes Impact : ScienceAlert
People in Portland Planted Trees. Decades Later, a Stunning Pattern Emerged : ScienceAlert
Crocodiles Seem to Be Thriving in a Toxic River That’s More Like a Sewer. Here’s Why : ScienceAlert
Colossal Exoplanet Is One of The Most Massive Super-Earths Ever Discovered : ScienceAlert
A Tobacco Plant Has Been Engineered to Produce Cocaine in Its Leaves : ScienceAlert