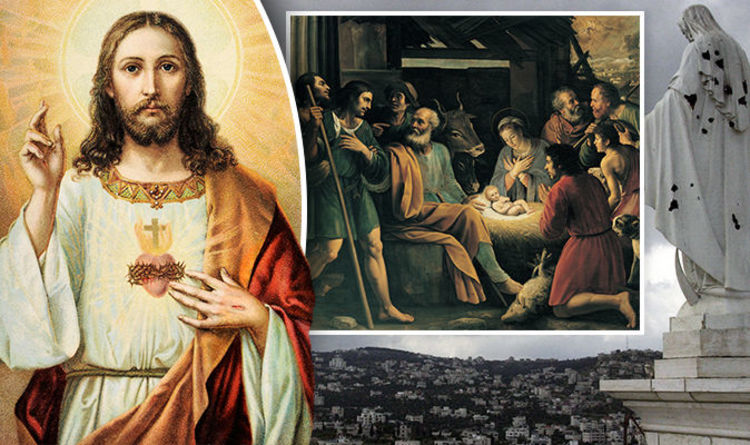 It is the widely accepted version of the story of the birth of Christ, with passages in both the gospels of Matthew and Luke referring to Jesus being born there.

Christians still flock to the Church of the Nativity in Bethlehem to see the birthplace of Christ in the city in the West Bank, six miles south of Jerusalem.

According to Matthew in the New Testament, Joseph and Mary were living in Bethlehem at the time of Jesus’ birth, later moving to Nazareth in northern Galilee.

Apostle Luke wrote independently that the couple travelled more than 90 miles from their home they already had in Nazareth to Joseph’s Judean hometown of Bethlehem in order to be counted in a Roman census.

Despite the variance, both accounts agree Jesus was born in Bethlehem in Judea.

Bethlehem? But which one was Jesus born in?

This was the city where King David was born a thousand years before, and it meant Jesus could be seen as a descendant of the House of David, one of the then requirements of followers of the Judeo-Christian religion.

However, there have been Biblical scholars who have since questioned if Jesus may have been born somewhere else.

Megan Sauter wrote on Biblicalarchaeology.org: “If Jesus was indeed born in Bethlehem, why is he called a Nazorean and a Galilean throughout the New Testament, and why is Bethlehem not mentioned as Jesus’ birthplace outside of the infancy narratives in the Gospels?

“This has caused some to wonder if Jesus was actually born in Nazareth.


If Jesus was indeed born in Bethlehem, why is he called a Nazorean and a Galilean throughout the New Testament, and why is Bethlehem not mentioned as Jesus’ birthplace outside of the infancy narratives in the Gospels?


“So if Jesus was born in Bethlehem, as the Gospels of Matthew and Luke attest, why was he called a Nazorean?”

The debate has in fact, rumbled on for a number of years, with claims that Jesus may have actually been born in another Bethlehem 100 miles north in Galilee.

Archaeologist Aviram Oshri from the Israeli Antiquities Authority became convinced this was the true Bethlehem where Jesus was born after studying the matter since the early 1990s.

He said the database of the Israel Antiquities Authority (IAA) has a complete absence of information for antiquities from the Herodian period (when Jesus was born) for Bethlehem in Judea.

He said: “I was contracted to perform some salvage excavations around building and infrastructure projects in a small rural community in the Galilee.

“When I started work, some of the people who lived around the site told me how Jesus was really born there, not in the south.

“Intrigued, I researched the archaeological evidence for Bethlehem in Judea at the time of Jesus and found nothing.

“This was very surprising, as Herodian remains should be the first thing one should find.”

He is now convinced Jesus was born in the lesser known Bethlehem just eight miles from Nazareth.

Dr Oshri argues the couple could have reached the smaller Bethlehem in three hours, but the trek to Judea through the desert would have take two days of continuous donkey travel, something Mary “could not have managed at nine months pregnant”.

He has claimed archaeological records for the northern Bethlehem match descriptions in the Bible, whereas, the same has not been found in the southern namesake.

Dr Oshri said there was a fortified wall around the Biblical Bethlehem, and no such remains have been found in the West Bank, however there are similar remains  in Galilee.

He was not alone in this theory that Jesus was not born on the West Bank.

The late US Biblical scholar Marcus Borg, who died in 2015, who penned the book ‘Meeting Jesus for the First Time’ believed Christ was born in Nazareth, because he was known as Jesus of Nazareth.

Despite the debate, most scholars are content with the original theory that Mary and Jospeh did travel to Bethlehem in Judea to register in the census, and Jesus was born there.

Many say there is no evidence he was born in Nazareth or its nearby Bethlehem.

Phillip J King wrote in the November/December 2014 issue of the Biblical Archaeological Review: “According to the Gospels, Jesus was born in Bethlehem but lived in Nazareth.

“While there has been a lot of scholarly discussion about whether or not he was actually born in Bethlehem,a both places are useful for teaching about the historical Jesus—regardless of any perceived conflict—and inspire us to take a deeper look at how Jesus was influenced by his environment.”

He said the issue to be discussed was the birthplace of Jesus.

He added: “It seems clear from the infancy narratives in the Gospels that Bethlehem (in Judea) was the place of Jesus’ birth.”

He pointed to Matthew 2:1–2 which states: “In the time of King Herod, after Jesus was born in Bethlehem of Judea, wise men from the East came to Jerusalem, asking, ‘Where is the child who has been born king of the Jews?’”

And, Luke 2:4–7, which states: “Joseph also went from the town of Nazareth in Galilee to Judea, to the city of David called Bethlehem… He went to be registered with Mary, to whom he was engaged and who was expecting a child. While they were there, the time came for her to deliver her child. And she gave birth to her firstborn son.”

He concluded: “The infancy narratives in the Gospels give no indication that Jesus was born elsewhere.”

For The First Time, Scientists Have Named a Heat Wave. Here’s Why It’s a Big Deal : ScienceAlert
‘Gifted’ Dogs Seem to Have This One Characteristic in Common : ScienceAlert
Plants Have Been Keeping a Secret From Us About How Thirsty They Actually Are : ScienceAlert
You’re Probably Taking Your Pills Wrong, New Study Finds : ScienceAlert
Many Cat Lovers Are Giving Their Cats Unwanted Affection, Study Suggests : ScienceAlert