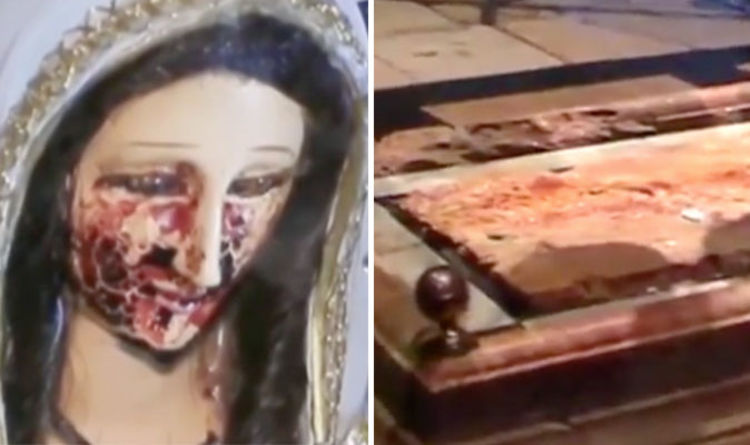 
A recent clip shared on the internet appeared to show a statue of Jesus’s mother crying in New Mexico, USA last week.

The churchgoers claimed the tears smelt like “flowers” during a service at Our Lady of Guadalupe Catholic Church in Hobbs.

A debate about the controversial footage has emerged online since its release.

On the website catholic.org, one writer suggested the liquid manifestations are a sign of the Virgin Mary “praying for the conversion of hearts”.

They added: “We must do all we can to ensure our own hearts are ready for we know not the hour when the Master will return.”

The concept of “return” supposedly refers to the book of Revelations in the Bible which claims Jesus will return to Earth – signalling Judgement Day.

But not everyone has been convinced by the bizarre phenomenon.

Sceptics have pointed out and often provided examples of such incidents being hoaxes.

But this is not the first time weird sightings have occurred.

A video taken in 2016 in Mexico showed a similar statue appearing to cry blood.

And back in April, blood was spotted leaking from the tomb of Jesus Christ, according to claims online.

The footage showed the Stone of Anointing in Jerusalem.

This is the site where Christians believe Jesus’s body was prepared for burial.

Thousands of YouTube users commented on the clip after it went viral, with many claiming it was the sign of the “Passover”.

“The truth is in front of people and they just deny it.”

Other users agreed, with many referring to the Biblical book of Exodus, which Christians believe shows how God told Moses to paint lamb’s blood on their doors so their oldest child would not die.

Blood also plays a role in the book of Revelations as it talks about Jesus’ Second Coming.

The book describes Christ as appearing in “a robe dipped in blood”.

The Catholic Church has launched a probe into the footage.

Forests at Risk of Burning an Extra 30 Days a Year Without Climate Action : ScienceAlert
Lyme Disease Is on The Rise, But There Might Be Hope in a New Vaccine : ScienceAlert
A Tobacco Plant Has Been Engineered to Produce Cocaine in Its Leaves : ScienceAlert
It Sounds Crazy, But Walking Backwards Is Really, Really Good For You : ScienceAlert
Some People May Make Extreme Snap Judgements About You Thanks to Face-ism : ScienceAlert