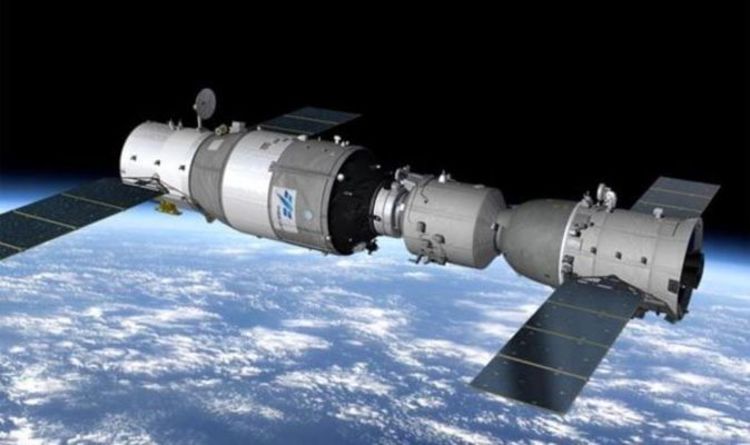 
Chinese scientists lost control of the space station in 2016 and the European Space Agency believes Tiangong-1 satellite will reenter the Earth’s atmosphere next week.

Although they cannot predict where the flaming debris will land, they think it will hit over the Easter weekend, between March 30 and April 3.

According to experts tracking the station, the satellite has the highest chance of crashing along a narrow strip around latitudes of 43 degrees north and south.

This includes a number of highly populated cities including New York, Barcelona, Beijing, Rome and Toronto.

The ESA said crash date estimates were ‘highly variable’ and that its experts will be closely monitoring the situation and offering revised forecasts every couple of days.

The agency’s Space Debris Office, based in Darmstadt, Germany said: “At no time will a precise time/location prediction from ESA be possible.

“This forecast was updated approximately weekly through to mid-March, and is now being updated every 1~2 days.”

The doomed 8.5tonne space station has been hurtling towards earth since Chinese scientists lost control of it in 2016.

It is highly unlikely the space craft will hit anyone when it comes back to Earth.

Aerospace Corporation said: “When considering the worst-case location, the probability that a specific person will be struck by Tiangong-1 debris is about one million times smaller than the odds of winning the Powerball jackpot.

“In the history of spaceflight, no known person has ever been harmed by re-entering space debris.

Earlier this year we reported Tiangong-1 was carrying a toxic chemical called hydrazine on board.

Although it is used as rocket fuel, exposure to humans can cause nausea and seizures, and long-term contact can cause cancer.

The liquid is corrosive and may produce dermatitis from skin contact in humans and animals.