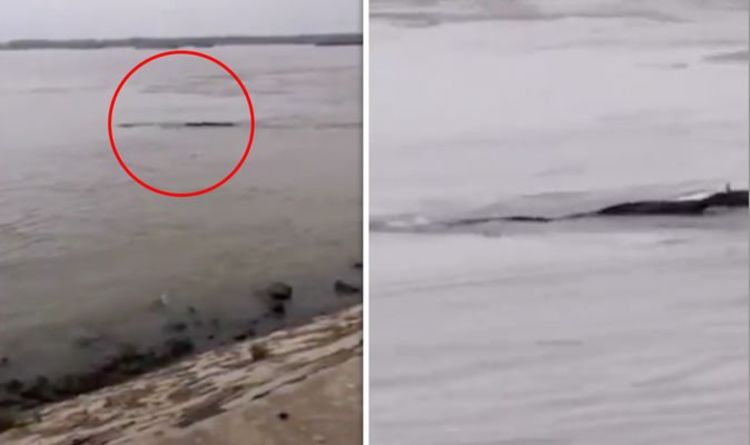 
Mysterious footage of a Loch Ness-style creature has sparked an online frenzy in China, amid speculation that it could be a mythical creature. A snake-like creature has been filmed three times in the past week moving through the Yangtze River. In the latest footage, the shocking video shows onlookers stunned by the sight of the creature, which remains unidentified.

China’s government officials have remained silent on the matter, prompting speculation over the identity of the creature.

Thousands of online viewers have discussed whether the creature is an mysterious type of water snake – or something previously unknown.

All three appear to show a metre-long black creature slithering through the waters of the Yangtze.

The first video, shot from a ferry dock in Yichang, Central China’s Hubei Province, revealed the giant creature’s body breaking the surface of the water.

Another clip was filmed at at the Three Gorges Dam Scenic Area, a popular tourist spot in Yichang City.

It is very long and dark, resembling what the Loch Ness Monster has often been described as.

The video has led some online users to both speculate that the creature has been hiding behind the world’s largest dam.

Hypertension Drug Shown to Extend Lifespan And Slow Aging in Animals : ScienceAlert
Mysterious ‘Zone of Uncertainty’ Inside The Brain Reveals a Surprise : ScienceAlert
Scientists Reveal The Most Distant Galaxy We’ve Ever Found : ScienceAlert
An Expert Explains Why The Radioactive Water Stored at Fukushima Should Be Released : ScienceAlert
Newly Discovered Fossil Reveals Hundreds of Teeth ‘Never Seen Before in a Pterosaur’ : ScienceAlert