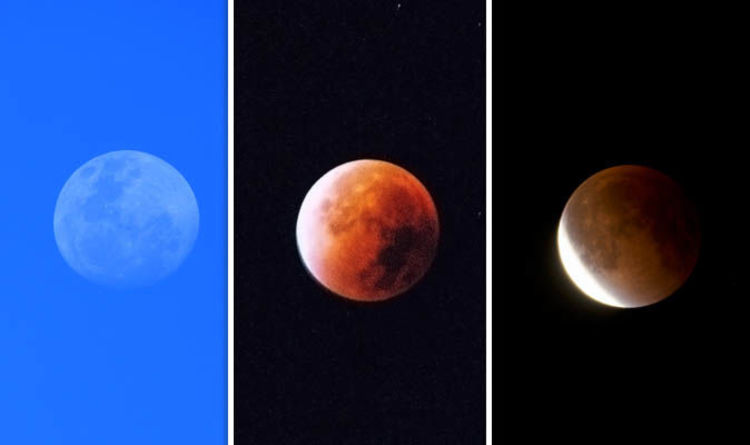 The second supermoon of the year will peak in the night skies on January 31, hot on the heels of the January 1 and December 3 supermoons – a rapid succession of lunar showmanship which NASA has dubbed the ‘Supermoon trilogy’.

But the upcoming supermoon is of particular interest to space boffins, because it marks not one, but four separate lunar events on the same night for the first time in 150 years.

The moon will rise this year in tandem as a Blue Moon, a supermoon, a Blood Moon and will be topped off by a total lunar eclipse for good measure.

Blue Moons only appear every two-and-a-had years according to NASA, and this year the “celestial rhythms” are syncing up the space agency said.

When will the Super Blue Blood Moon appear?

The Blue Moon will rise on January 31, but the depending on where you live, the time will vary to greater or lesser extents.

In the UK, the moonrise will occur sometime around 4.55pm GMT, whereas viewers in New York will have to wait till 5.35pm EST and moon gazers in Brazil will be left out until 7.54pm BRST.

But the real spectacle – the lunar eclipse – will not begin until halfway through the night when the moon passed though the Earth’s shadow.

The partial eclipse is expected to begin around 11.48am UTC, before reaching its peak at 1.29pm UTC.

Unfortunately viewers in the UK will be left out of the spectacle, because the eclipse will occur over the Eastern Hemisphere – over large swathes of Asia and the Pacific.

Some off the best places to watch the eclipse include Russia, Asia, Australia as well as parts of the US and northeastern Europe.

Unfortunately for stargazers, the moon does not actually turn blue this month.

A Blue Moon is a term used by astronomers when two full moons appear in the same month.

Because the occurrence is very rare, it is often used as an idiot – once in a Blue Moon.


A blue Moon, by folklore definition is said to be the second Full Moon of the month


Royal Observatory Greenwich said: “A blue Moon, by folklore definition is said to be the second Full Moon of the month.

“However, researchers at Southwest Texas State University have been using historical documents to prove that a blue Moon was really a term used by the Maine Farmers’ Almanac to indicate the presence of a 13th Full Moon in a tropical year which usually had 12.”

This years Blue Moon eclipse will be the first of its kind to happen in 150 years.

What is a supermoon?

The popular non-scientific term describes conditions in which the moon comes within 90 percent of its perigee, or closest distance to the Earth.

Lyle Tavernier from NASA’s Jet Propulsion Lab explained: “Full moons can occur at any point along the Moon’s elliptical path, but when a full moon occurs at or near the perigee, it looks slightly larger and brighter than a typical full moon.

“That’s what the term ‘supermoon’ refers to.

“Because supermoon is not an official astronomical term, there is no definition about just how close to perigee the full moon has to be in order to be called ‘super’. 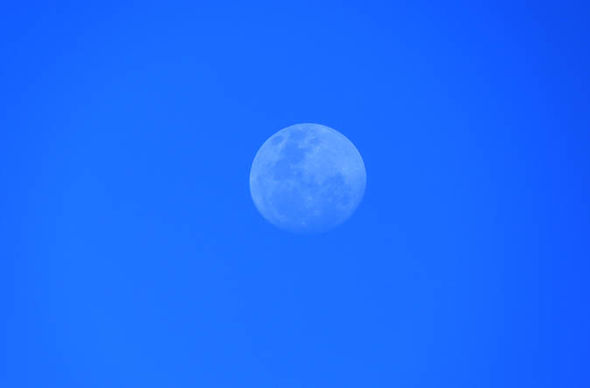 Unlike the Blue Moon, there is a good chance that certain parts of the world will briefly witness the moon change into reddish hue just before the eclipse.

When the planet’s showed block out direct sunlight, some of the sun’s rays still make it through and their colour are filtered out through a process known as Rayleigh scattering.

Rayleigh scattering is the same process through which the skies appear blue and sunsets and sunrises look manificnelfy reddish and orange.

Red wavelengths of light are the least affected by the scattering effect, which is why the moon appears to be red for a while. 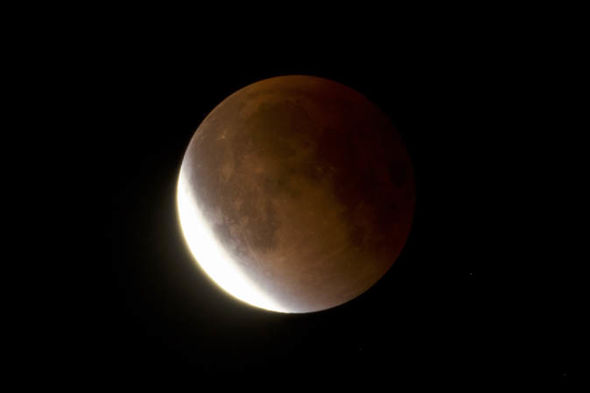 What is a lunar eclipse?

A lunar eclipse happens whenever the moon passes through Earth’s shadow, also known as its umbra.

During a total lunar eclipse, the moon aligns itself perfectly being Earth in a straight line, disappearing from sights, because it no longer reflects light from the sun.

When the sun, Earth and moon are no perfectly aligned, only a portion of the planet’s shadow masks the moon in what is known as a penumbral lunar eclipse.

Total lunar eclipses also only happen during a full moon.