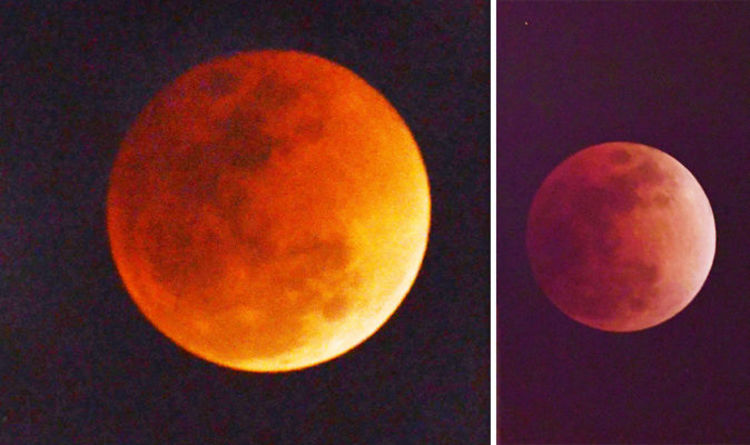 
The lunar phenomenon occurs when Earth’s moon is in a full eclipse – the event results in the moon looking red.

The Moon takes roughly 27 days to orbit Earth and goes through regular phases in a 29.5-day cycle.

Differences in the two cycles occur from the relative positions of the moon, Earth and sun that change during a moon orbit.

It is only during a full moon a lunar eclipse can occur, this is when the sun fully illuminates its surface.

An eclipse occurs when Earth passes between the moon and the sun cuts off the sunlight.

During a full eclipse the moon is fully enshrouded in the shadow of Earth, but at the same time some light from sunrises and sunsets from Earth manage to fall on the moon’s surface.

When light waves in this instance are stretched, they appear red – when they hit the moon’s surface they also appear red, making the moon look the same colour.

Levels of pollution, debris and cloud can affect how red the moon appears in the sky.

If an eclipse takes place shortly after a volcanic eruption, such as that in Hawaii for instance, particles in the atmosphere can make the red look darker than it does typically.

Although the solar system is littered with planets and moons, only Earth is able to experience a lunar eclipse.

This is because the size of Earth’s shadow is large enough to cover the moon fully.

The blood moon next month will be the biggest witnessed so far this century when it graces the sky on July 27.

During the celestial event, Mars will also be the closest it has been to earth in 15 years, making for a double treat for stargazers.

The eclipse next month will be longer than usual because the moon will pass almost directly through the middle of Earth’s shadow.

Adding to the spectacular nature of the phenomenon is the fact Earth will be at its furthest point from the sun.

This will allow for a bigger shadow to be cast.

Bruce McClure, an expert on celestial events, said the spectacular event will be “primarily visible” on the Eastern Hemisphere.

He explained: “This lunar eclipse is primarily visible from the world’s Eastern Hemisphere – Europe, Africa, Asia, Australia and New Zealand.

“North America, most of the Arctic and much of the Pacific Ocean will miss out entirely.

“The greatest eclipse takes place at or around midnight for Madagascar and the Middle East.

Psychologists Found a Weird Trick That Changes How Food Tastes : ScienceAlert
Millions of ‘Silent Synapses’ Could Be The Key to Lifelong Learning : ScienceAlert
Earth’s Oxygen Came From an Unexpectedly Deep And Hot Source, Study Suggests : ScienceAlert
These Mysterious Fungi Belong to an Entirely New Branch on The Tree of Life : ScienceAlert
We May Finally Know How Lightning Gets Its Zigzag Shape : ScienceAlert