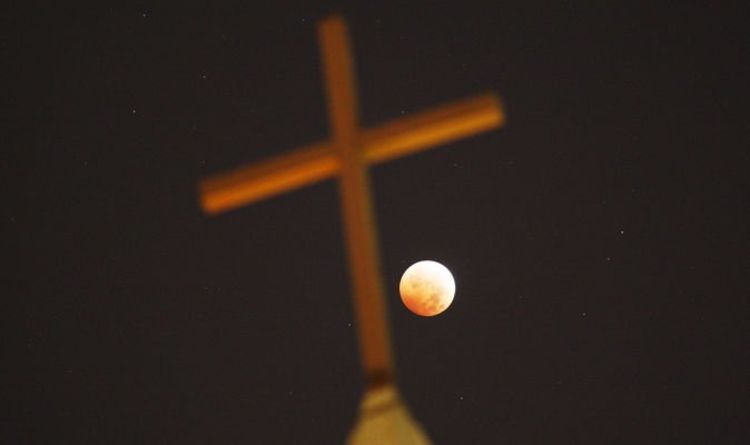 
A blood moon occurs during a total lunar eclipse when the moon takes on a crimson tinge as it is lit up by sunlight refracted by the Earth. While the lunar spectacle is a natural occurrence, some Christian theorists have begun linking them with end of times predictions. And one of the most prominent naysayers is Indiana evangelical pastor Paul Begley. In his latest warning, Pastor Begley has warned “this Super Blood Moon directly over the United States on the second anniversary of President Trump being sworn into office is a prophetic sign. It is going to be without a doubt a prophetic sign.”

Will the blood moon in January 2019 signal the end of the world?

Pastor Begley points to some key Biblical passages as evidence of the end of the earth being nearly upon us.

Known as the blood moon prophecy, they include one ‘warning’ from the Book of Joel 2:31.

The passage reads: “The sun shall be turned into darkness, and the moon into blood, before the great and terrible day of the Lord come.”

Another can be found in the Book of Revelation 6:12.

This one states: “And I beheld when he had opened the sixth seal, and lo, there was a great earthquake, and the sun became black as sackcloth of hair, and the moon became as blood.”

Pastor Begley said: “Is this an omen? Is this a sign of things that will happen in those following two years?

“We will be the ones that will help protect Israel during their time when they are being accosted and being even attacked – coming under siege.”

If this has left you a little anxious, then fear not as blood moon eclipses are common phenomenon – and not apocalyptic if previous warnings are anything to go by.

And despite some preachers’ dire warnings, the world did not come to a crashing end as predicted.

Where can you watch January’s blood moon?

January’s blood moon will be visible from the United States, South America, western Europe and Africa between January 20 and 21.

‘SuperGPS’ Technology Accurately Pinpoints Your Position Within Inches : ScienceAlert
Mysterious Changes Identified in The Brains of People Who Get Migraines : ScienceAlert
Expert Proposes a Method For Telling if We All Live in a Computer Program : ScienceAlert
The Cause of Alzheimer’s Could Be Coming From Inside Your Mouth : ScienceAlert
Ancient ‘Weird Wonders’ Could Be Leftovers From The Cambrian Explosion : ScienceAlert