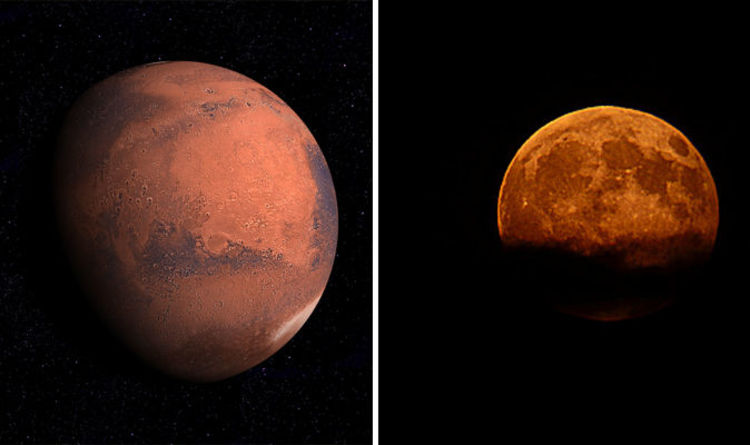 
The Mars Close Approach happens around every 26 months when Earth and the Red Planet are nearest to each other in their orbits around the sun, but this year the distance will be even closer.

The last time the Red Planet was this close to Earth was in 2003, when the distance was only 55.7million kilometres away, the closest in nearly 60,000 years.

Dean Regas, an astronomer at the Cincinatti Observatory, stated this year’s event will be almost as good as 2003.

He said:”Mars will be visible to the naked eye.

He said:”Mars will be visible to the naked eye.

“In fact, you will be hard pressed to miss it.

“It will look like a glowing orange beacon of light rising in the southeast after sunset.

“And you’ll see it every night for the next several months.”

According to NASA Mars will peak on July 31 after a bright lead up from the 27th.

The Red Planet will be just 35.8million miles from Earth and will reach its highest point on July 31 at around midnight but will be visible for much of the night.

In addition to the Mars Close Approach, sky gazers will also witness a once-in-a-lifetime total lunar eclipse on July 27.

Astronomers have revealed it will be the longest total lunar eclipse of the century and will last one hour and 43 minutes, which is nearly 40 minutes longer than the January 31 Super Blue Blood Moon combo.

According to astronomer Bruce McClure of EarthSky.org, the eclipse will take place sometime around 8.22pm UTC or 9.22pm UK time.

The space expert said: “The July 2018 full moon presents the longest total lunar eclipse of the 21st century on the night of July 27 to 28, 2018, lasting for a whopping one hour and 43 minutes.

During the eclipse, when the moon passes through the shadow cast by Earth, the moon will take on a deep red to orange colour rather than completely disappear from sight.

This bizarre effect known as Rayleigh scattering, which filters out bands of green and violet light in the atmosphere during an eclipse.