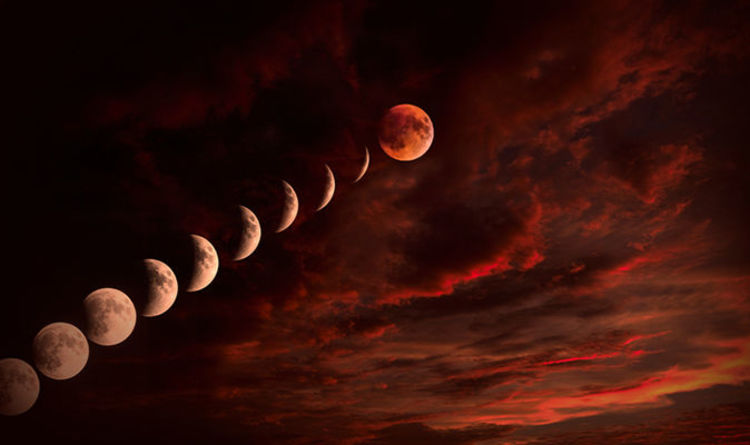 
Stargazers will be scouring the skies later this week as a lunar phenomenon will be visible in the night sky.

A total lunar eclipse will take place on July 27, when the earth will pass between the sun and the moon.

This casts a shadow on the moon, triggering a total eclipse.

Given the moon is currently the furthest away in its orbit, it will take longer to pass through the shadow causing the eclipse to be the longest in 100 years.

The total eclipse will last for one hour and 43 minutes as the moon stays inside the umbra of the earth.

Areas at a prime position to see the eclipse in its full glory are eastern Africa, central Asia and the Middle East.

Those in Europe can most likely see a partial lunar eclipse.

The Blood Moon is so named due to the reddy-orange hue the moon takes on during the eclipse.

The moon itself has no atmosphere in which to refract sunlight and create colours, so the red colour comes from another source.

The earth, on the other hand, has an atmosphere richly filled with nitrogen, which absorbs the white sunlight and a mix of all colours on the spectrum.

This is the reason our sky is blue, as it scatters the blue hues throughout the day.

At sunset and sunrise, the refracted light becomes even more scattered and removes the blue colours, making it orange or red.

The reason the moon takes on a red hue is due to the earth acting as a lens, refracting the reddy-orange light onto the moon’s surface.

Dave Mosher and Shayanne Gal from Business Insider explain when we look up and see the red moon at the time of the eclipse: “we’re actually seeing earth’s refracted sunset-sunrise light being bounced right back at us”.

In the UK this lunar phenomenon will be able to be seen from 8.30pm BST, with the eclipse first beginning below the horizon.

Those in Scotland will be able to see the eclipse at the slightly later time of 9.20pm BST.

At around 12.30am on Saturday 28, the moon will return to its usual white glow.

To best see the lunar eclipse, heading out of cities and towards areas with the least light pollution as possible will give a clearer view.

However, the Royal Observatory Greenwich will be providing a live stream of the eclipse with astronomer commentary for those unable to head out to see the lunar event.

Weight Lifting in Old Age Does More Than Just Keep Your Muscles Strong : ScienceAlert
Hubble And Webb Pics Reveal DART Impact Was Even Bigger Than Expected : ScienceAlert
Narwhals Are So Weird, Scientists Used Chaos Theory to Explain Their Behavior : ScienceAlert
These Are The Most Distant Star Clusters Ever Seen, And We Nearly Missed Them : ScienceAlert
Experts Estimate The Scale of The Nord Stream Pipelines Methane Leak : ScienceAlert