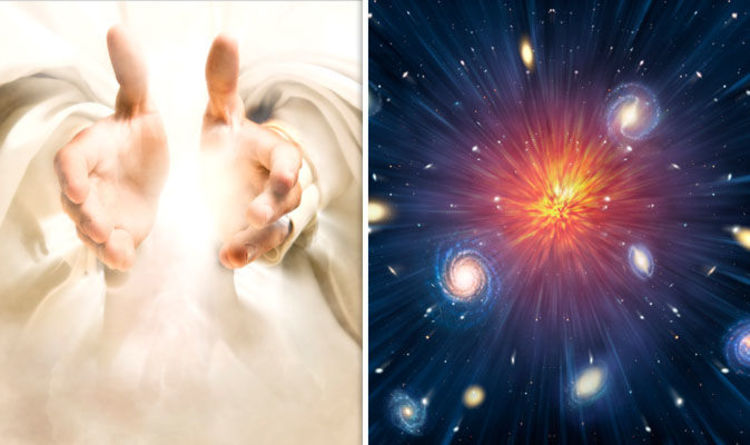 
The scientific world has been at odds with religion for centuries but the debate has grown increasingly heated in recent years – particularly over the origins of the universe. Creationists believe in the Book of Genesis, which tells the story of God creating the heavens and the earth in seven days, but critics argue that the world we know today was formed after a cosmological event known as the “Big Bang” followed by centuries of evolution. However, academics suggest the two may not need to be at odds after all.

The Old Testament’s Book of Job 37:18 reads as follows: “Hast thou with him spread out the sky, which is strong and as a molten looking glass?”

This, according to experts, implies biblical knowledge of what we now know as the Big Bang theory.

As estimates suggest the Book of Job was written around 600BC, this would mean the theory itself could be over 2,600 years old.

Analysing the passage, Christian thinkers have paraphrased it to mean: “Were you with God when he stretched out particles from the Big Bang which violently caught, fastened and, via seething heat, cleaved to each other forming hard celestial bodies.”

The Book of Job has attracted attention for centuries as one of the richest theological works found in the Bible.

Lord Tennyson even called it “the greatest poem of ancient and modern times”.

In 2007 Amazon Prime Documentary “Unlocking Ancient Secrets of the Bible”, host Roger Moore argues: “Not only does the Book of Job communicate valuable moral truths but some scientists believe it speaks of future scientific discoveries.”

Creationist academic Hugh Ross claims: “The Book of Job talks about the beginning of the universe and how it’s a beginning beyond matter, energy, space and time.

“It’s the first book of the Bible that talks about the expansion of the universe.

“Fred Hoyle, the famous British astronomer, said that the Bible is amazing in what it says about cosmology.

“The universe is traceable back to an actual beginning of matter, energy, space and time.”

He even argues that it discusses how lifeforms were created with “optimal designs”.

He adds: “One of the dominant themes you see in the Book of Job is that it talks about God creating life in an optimal form and optimal designs.

“In other words, he creates carnivores to relate to herbivores so the carnivores are only able to kill off the weak, the dying and the sick – or the unwearing.