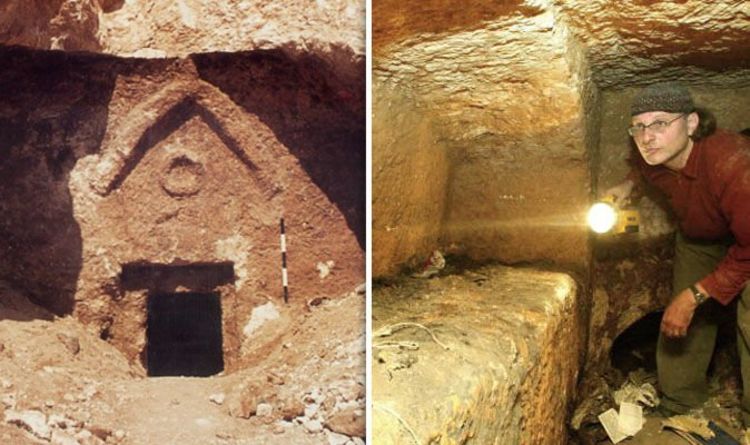 
The Church of the Holy Sepulchre is located in the Christian Quarters of the Old City of Jerusalem.  Dating back to at least the fourth century, it is believed to be the site where Jesus Christ was crucified some time between 30 and 33 AD. It also contains a tomb known as “Calvary” or “Golgotha” which is where Jesus is said to have been buried and resurrected.

However, the apparent son of God may have actually been concealed in a tomb more than 5km across Jerusalem, it has been claimed.

Netflix documentary “Top 10 Mysteries and Secrets” details how a burial site in East Jerusalem, known as the Talpiot Tomb was discovered in 1980 with some interesting contents.

Inside it contained ossuaries [chests] inscribed with religious epigraphs and drawings of what is believed to be a family.

In 2008, director James Cameron and journalist Simcha Jacobovici released a film titled “The Lost Tomb of Jesus”, detailing how the site was actually the burial place of Jesus Christ.

Controversially, it went on to claim that Jesus, along with members of his family and several other figures from the New Testament died inside the tomb and did not rise again.

However, this conclusion is disputed by many archaeologists and biblical scholars for one strange reason.

“The tomb has the miracle of holy fire,” the 2017 Netflix series revealed.

“Every year on the day before Easter a miracle takes place in front of the tomb.

“A mysterious blue light rises from the place where he once laid.”

The so-called miracle has received its fair share of criticism though, as it has never been scientifically verified despite numerous witnesses.

A Strange Thing Happens to Wolves Infected by Infamous Mind-Altering Parasite : ScienceAlert
Mysterious Tendrils Inside The Brain May Control Our Perception of Time : ScienceAlert
Psychologists Found a Weird Trick That Changes How Food Tastes : ScienceAlert
Oldest Known Dog Bone Hints Our Best Friends Were With Us Earlier Than Thought : ScienceAlert
A ‘Wormhole’ Built on a Quantum Computer Teleported Information as Predicted : ScienceAlert