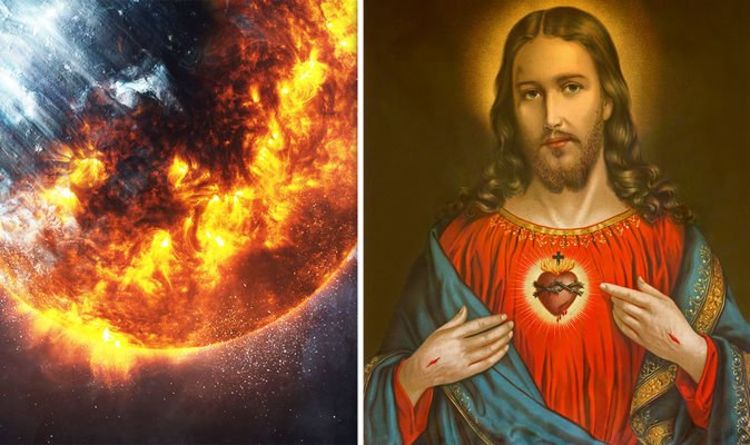 In the Book of Revelation, the Seven Seals represent the apocalyptic vision foreseen by John of Patmos. The opening of the seals of the document is told in Revelation Chapters five to eight, with several passages describing the events around Earth that occur before the Second Coming is possible. Biblical preacher Greg Sereda believes the Earth is now just one step away from opening the seventh of the seals, which will apparently mark the end of the world.

“That is the period of history we have been living in.

“The sixth seal is described in Revelation 6:12 – 6:13, it says: ‘And I beheld when he had opened the sixth seal, and there was a great earthquake and the Sun became black as sackcloth of hair, and the Moon became as blood and the stars of heaven fell unto Earth, even as a fig tree casteth her untimely figs, when she is shaken of a mighty wind.’

A preacher has warned of a 2020 apocalypse (Image: GETTY)

The Book of Revelations fortells the end times (Image: GETTY)

“Several signs are mentioned here, affecting the Sun, Moon and stars, these are the same signs mentioned in the gospels when Jesus spoke about the end of the world.

“In Mathew chapter 24:29, Jesus said: ‘Immediately after the tribulation, those days shall the Sun be darkened and the Moon shall not give her light, and the stars shall fall from heaven, and the powers of the heavens shall be shaken.”

Mr Sereda then went on to discuss some events that he has correlated to the Book of Revelation over the last few hundred years.

He added: “These signs began with a great earthquake, the Lisbon earthquake of November 1, 1755, the most terrible earthquake that has ever been recorded, it affected nearly four million square miles and had a magnitude of 8.5 to 9.0.

“40 minutes after the quake, a tsunami followed, which was reported to be 50 feet high, then the city began to burn drastically for hours.

JUST IN: Bible breakthrough: How ‘man who inspired Jesus’ was exposed in ancient stone

“The death toll was estimated to be between 10,000 and 100,000, making it one of the deadliest earthquakes in history.

“Revelation 6:12 says that after the earthquake the Sun will become black as sackcloth of hair and the Moon as blood.

“This was fulfilled just 25 years after the earthquake, in New England, when at about eight o’clock in the morning, a smokey hue started rolling in, getting darker and darker, until the Sun was completely blacked out by noon.”

However, that was not all.

Mr Sereda continued: “Not only that, but after midnight the darkness disappeared and the Moon, when it became visible, had the appearance of blood.

The prediction would see the return of Jesus (Image: GETTY)

“This was a region of Earth with devout Christians who would have been able to recognise this as a sign of the end times.

“The next end times sign was the stars falling from heaven, this was fulfilled on November 13, 1933, when the greatest meteor shower of history took place – the whole sky across North America was lit up for four hours.

“So you can see that the signs of the six seal including the earthquake, the Sun becoming black, the Moon becoming as blood and the stars falling from heaven, have already been fulfilled.”

Mr Sereda concluded his video by sending a warning for the year ahead.

He stated: “This means we are living in the sixth seal of revelation and we will see these signs repeated in quick succession right again before the return of the Lord [in 2020].

“The reason there will be silence in heaven, it because Jesus and his angels will come to Earth during Jesus’ Second Coming to gather his saints.

“Since Jesus and his angels will vacate heaven to come to Earth, heaven becomes silent.”

Despite the claims, scholars are still drawn over the reliability of the Book of Revelation itself.

Modern biblical scholarship attempts to understand Revelation in its first-century historical context within the genre of Christian apocalyptic literature.

This approach considers the text as an address to seven historical communities in the Middle East.

Under this interpretation, assertions that “the time is near” are to be taken literally by those communities.

Consequently, the work is viewed as a warning to not conform to contemporary Greco-Roman society which John “unveils” as beastly, demonic, and subject to divine judgment.

New Testament narrative criticism also places Revelation in its first-century historical context but approaches the book from a literary perspective.

For example, narrative critics examine characters and characterisation, literary devices, settings, plot, themes, point of view, implied reader, implied author, and other constitutive features of narratives in their analysis of the book.

Although the acceptance of Revelation into the canon has, from the beginning, been controversial, it has been essentially similar to the career of other texts.

The eventual exclusion of other contemporary apocalyptic literature from the canon may throw light on the unfolding historical processes of what was officially considered orthodox.

Interpretation of meanings and imagery are anchored in what the historical author intended and what his contemporary audience inferred, a message to Christians not to assimilate into the Roman imperial culture was John’s central message.