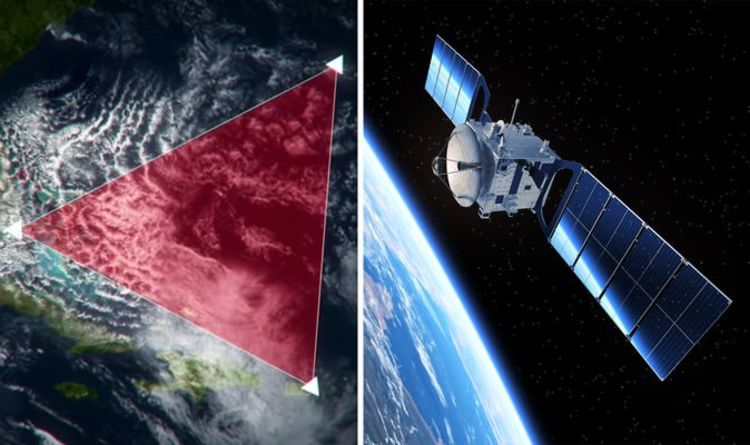 The Bermuda Triangle, also known as the Devil’s Triangle, is a loosely defined region in the North Atlantic Ocean, where a number of aircraft and ships have disappeared. The vicinity of this so-called triangle is among the most heavily travelled shipping lanes in the world, with vessels frequently crossing through it for ports in the Americas, Europe and the Caribbean islands. Popular culture has attributed various disappearances to the paranormal or even some kind of colossal sea monster, but the age-long question may have been answered by NASA.

The Science Channel explained in 2016: “NASA’s Terra Modis satellite is orbiting 450 miles above the North Atlantic.

“150 miles off the coast of Florida, over the Bahamas, the satellite photographs coastal clouds, when it captures something meteorologists find strange.

“When they analyse the image, they spot a series of hexagon-shaped clouds.

“The hexagons range in size from 20 to 55 miles across and would be intriguing anywhere, but the location of these make them fascinating.”

NASA made a discovery over the Bermuda Triangle (Image: YOUTUBE)

This satellite imagery is really bizarre

He said: “This satellite imagery is really bizarre, especially the hexagonal shapes from the cloud formation.

“With today’s radar, we can actually detect things that, previous to that, we simply couldn’t have seen otherwise.

“These types of hexagonal-shapes over the ocean are, in essence, air bombs.

“They are formed by what is called microburst air, blasts of air that come down out the bottom of the clouds and then hit the ocean, creating waves that become even bigger as they interact with each other.”

Scientists theorise these air bombs may be enough to capsize a boat, or bring down an aircraft.

The TV series went on to explain how another satellite image from near the UK helped to explain what was going on below the clouds.

It added: “The answer lies 4,500 miles away in another satellite image taken over the turbulent North Sea, off the coast of the UK.

A similar pattern was seen near the UK (Image: YOUTUBE)

“Scientists believe the powerful winds recorded in the North Sea also exist below the hexagonal clouds over the Bahamas.“

Over the years, compass problems have been cited as one of the main reasons for many disappearances.

While some have theorised that unusual local magnetic anomalies may exist in the area, no evidence of this has been found.

Compasses have natural magnetic variations in relation to the magnetic poles, a fact which navigators have known for centuries.

Magnetic north and geographic north are exactly the same only for a small number of places – for example, as of 2000, in the US, only those places on a line running from Wisconsin to the Gulf of Mexico.

However, the public may not be as informed and think there is something mysterious about a compass “changing” across an area as large as the Triangle, which it naturally will.