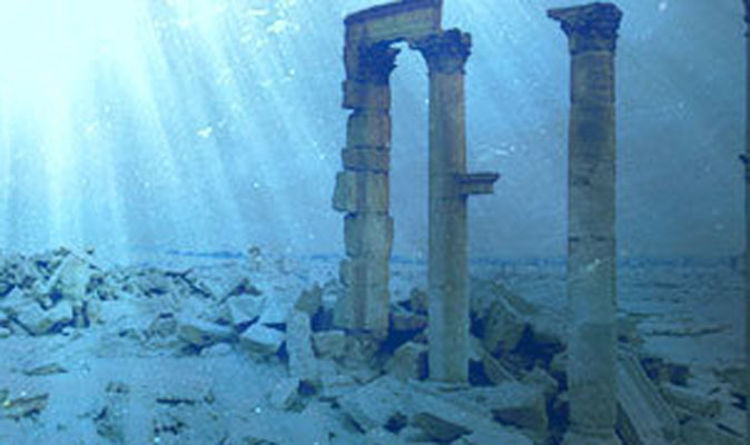 
Believers claim the site existed and was once the ruling seat of the world, before a natural disaster sank the entire island and all with it into the sea.

Now, thanks to the internet, satellite images, and the Google Maps systems, armchair investigators can join in the hunt from the comfort of their own homes.

Footage uploaded to YouTube has been said to show the outline of an ancient settlement – in the middle of the ocean.

The satellite image taken above an area known as the Madeira Abyssal Plane, off the coast of Morocco appears to show a square shape filled with perfectly straight lines inside, which some claim could be the outline and foundations of the mythical city.

Paranormal investigator Blake Cousins claims to have gone one better and now claims Atlantis could be a a few hundreds miles north-west of that near the Azores.

He claims to have discovered that the Azores island range is sitting on a huge land mass in the ocean, that he believes could be the sunken continent described by Plato, Dailystar.co.uk reports.

Using Google Earth, Mr Cousins measured this to be 413 miles wide which, he claimed, was similar to the size Plato described.

He then looked over the islands themselves and discovered a number of circular lakes and mountain ranges.

He said: “In my opinion, the Google Earth evidence is quite clear and astonishing.

Some viewers believe there should be a full on investigation with dives at the site to see what is there.

Others were less convinced, saying that Plato described Atlantis as being circular, not square.

It is not the first undersea discovery that has had myth hunters and conspiracy theorists excited.

The Baltic Sea Anomaly is an odd shaped undersea feature that some have speculated could even be a crashed UFO.

However, no dive teams as yet seem to have established that it is anything other than an odd rock formation.

Oldest Known Dog Bone Hints Our Best Friends Were With Us Earlier Than Thought : ScienceAlert
Chilling Glimpse Into Our Future if We Survive Another Million Years : ScienceAlert
When Corals Sleep For The Winter, Their Microbiome Restructures Itself : ScienceAlert
Millions of ‘Silent Synapses’ Could Be The Key to Lifelong Learning : ScienceAlert
Astronomers Spot The Biggest Galaxy Ever, And The Scale Will Break Your Brain : ScienceAlert