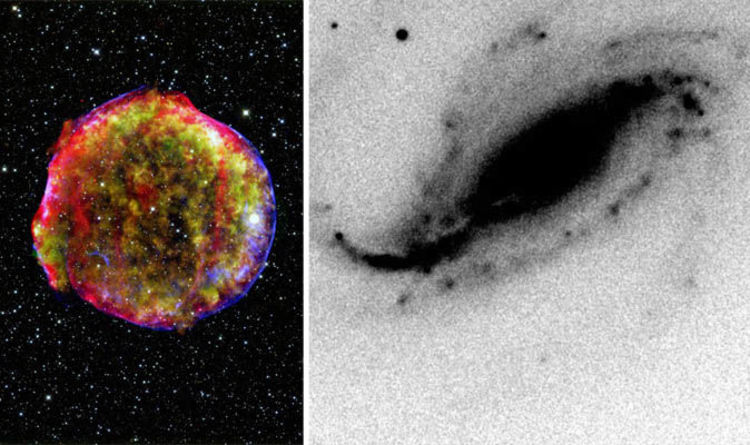 
Victor Buso, a locksmith by trade who is passionate about astronomy, recorded the birth of a normal type IIb supernova this week, since named SN 2016gkg.

Mr Buso, 58, encountered the miracle of nature after observing a blip of light in the distant NGC-613 spiral galaxy, 65 million light-years from Earth.

The sheer distance of how far away the galaxy is from ours, means Mr Buso witnessed an event that took place 65 million years ago and his timing could not have been more perfect.

According to astrophysicist Melina Bersten, the odds of ever encountering an event like this are just one in 10 million.

For Mr Buso, who lives in the Argentine city of Rosario, everything “clicked” the moment his camera snapped the supernova.

He said: “It’s so exciting to find and register something yet unseen by humans.”

Supernovae are a monstrous explosion of energy in the very last dying moments of giant star’s lifecycle.

In the last one thousand years only three naked-eye supernovae have been observed in the Milky Way galaxy.

Mr Buso now has the honour of photographing the very first one from Earth in its infant hours.

His discovery was published in the scientific journal Nature where it was heralded a “serendipitous discovery”.

Thanks to Mr Buso’s lucky finding, scientists have now been able to determine the star at the heart of the supernova was approximately 20 times the mass of our own.

The locksmith claims to have developed a passion for stargazing at the young age of 11 when he would use tin cans and magnifying glasses to look at the night skies.

He said his parents played a pivotal role in his interest with the stars, by showing him the Comet Bennett burning through the sky or staying up with him to watch Neil Armstrong on TV.

About eight years ago he sold a piece of land he owned with his father to build his very own astronomy tower on top go his house. He named it Observatorio Busoniano.

Armed with a 40cm telescope he trained his eyes on NGC-613 in September 2016, which led to his startling discovery.

His finding soon made the rounds in the scientific community, and researchers at University of California at Berkeley saying he photographed the supernova within the first hour of its birth.

This Physicist Says Electrons Spin in Quantum Physics After All. Here’s Why : ScienceAlert
Sword Mistaken For Replica Is Actually An Ancient 3,000-Year-Old Weapon : ScienceAlert
An Iceberg The Size of London Has Broken Free From Antarctica Ice Shelf : ScienceAlert
Scans of Mummified ‘Golden Boy’ Reveal He Was Covered in Magical Protections : ScienceAlert
Bacteria Can Use Plastic Waste as a Food Source, Which Isn’t as Good as It Sounds : ScienceAlert