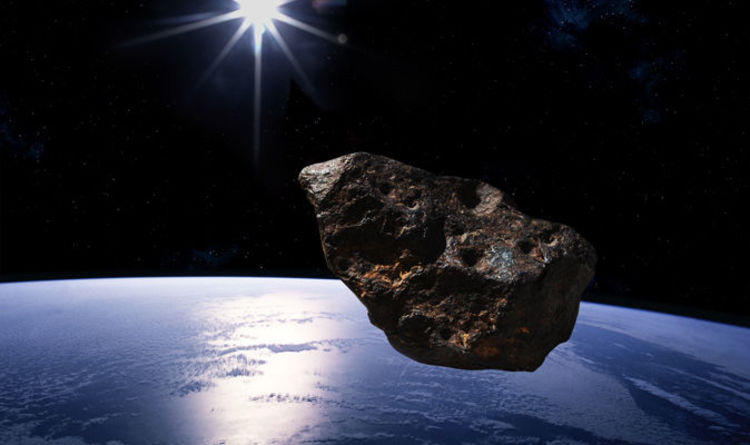 
In the early hours of Sunday an asteroid zoomed past the planet just hours after experts spotted the meteorite.

The miss is the closest an asteroid has come to us since records began.

Earthsky.org reported: “An Apollo type earth-crossing asteroid, was flying through space at 66,174 miles per hour.

“If the asteroid had entered our atmosphere, a great portion of the space rock would have disintegrated due to friction with the air.

“However, some of an asteroid this size might have gotten through to Earth’s surface, and an asteroid this big is capable of causing some regional damage, depending on various factors such as composition, speed, entry angle, and location of impact.”

Spaceweather.com reported: “It is a significant asteroid, illustrating how even large space rocks can still take us by surprise. 2018 GE3 was found less than a day before its closest approach.”

The asteroid was spotted by astronomers at the Catalina Sky Survey – a NASA backed program at the University of Arizona.

At 110 metres long, the asteroid would be almost six times the length of the meteor that almost wiped out Chelyabinsk.

Similarly, in 1908, a small asteroid up to 190 metres in size exploded over Siberia’s Tunguska which ruined woodlands across 800 miles.

In both instances, experts had no idea they were coming.

Professor Alan Fitzsimmons, from Queen’s University Belfast’s Astrophysics Research Centre, told Express.co.uk last year that incidents such as this highlight how unprepared the planet is.

Prof Fitzsimmons said: “It is important to know that scientists and engineers have made great strides in detecting Near-Earth Asteroids and understanding the threat posed by them.

“More than 1,800 potentially hazardous objects have been discovered so far, but there are many more waiting to be found.

“Astronomers find Near-Earth Asteroids every day and most are harmless.

“But it is still possible the next Tunguska would take us by surprise, and although we are much better at finding larger asteroids, that does us no good if we are not prepared to do something about them.”