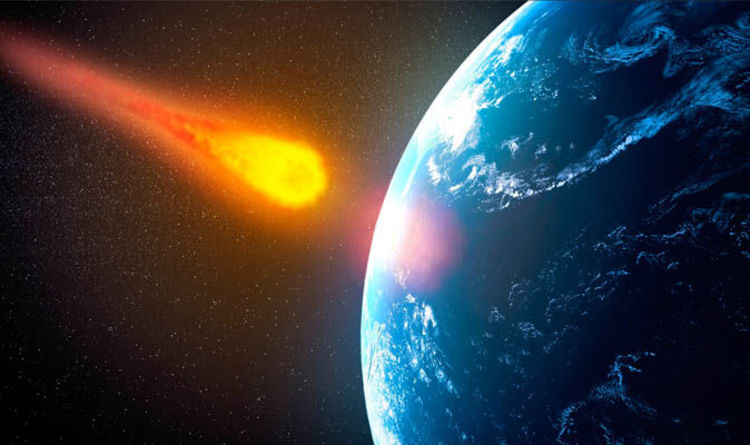 US space agency NASA warned the asteroid will skim the planet around 1am UK time next week.

NASA expects Asteroid NF23 to barrel towards the planet at terrifying speeds of 20,000mph (9km per second).

The asteroid is estimated to be anywhere between 230ft (70m) and 524ft (160m) in diameter, making it potentially bigger than the Great Pyramid of Giza in Egypt.

The asteroid is so big it is ranked on NASA’s list of potentially hazardous asteroids.

A space rock this large could kill millions and wipe out an entire city in an instant if it were to slam into the planet at full speeds.

So what exactly is the risk posed to Earth by Asteroid NF23?

It is true the asteroid is listed as a potentially hazardous space rock but there is absolutely no fear from NASA’s astronomers NF23 will hit anytime soon.

On August 29 the asteroid will safely pass the planet at a distance of about 0.0338 Astronomical Units which translates to more than three million miles (4.8 million km).

This staggering distance is equal to about 13 times the average distance from the Earth to the Moon.

Lindley Johnson, a planetary defence officer at NASA’s Headquarters in Washington, assured there is absolutely nothing to fear from the asteroid.

He told Space.com: “There is absolutely nothing for concern by this pass of 2016 NF23.

“This object is merely designated a Potentially Hazardous Asteroid (PHA) because its orbit over time wings it within five million miles of Earth’s orbit, but there is nothing hazardous to Earth or even unique about this pass of the asteroid.”

Asteroid NF23 is a so-called near-Earth object (NEO) – an asteroid or comet that zips past the planet dangerously close.

NASA’s repository of NEO asteroids is not a database of space rocks that will one day hit, but their close approach is enough to warrant interest from the space agency.

In 2017 NASA said none of the currently monitored asteroids in space are on a collision course with Earth for at least another 100 years.

NASA’s Jet Propulsion Laboratory (JPL) also said: “NASA knows of no asteroid or comet currently on a collision course with Earth, so the probability of a major collision is quite small.

“In fact, as best as we can tell, no large object is likely to strike the Earth any time in the next several hundred years.

“To be able to better calculate the statistics, astronomers need to detect as many of the near-Earth objects as possible.”

The space agency said it might be too late for the dinosaurs but astronomers are actively working on keeping humans alive.

Clinical Trial Restored Sight to 20 People With Corneas Made From An Unlikely Source : ScienceAlert
Researchers in South America Discover a New Species of Tiny but Tough Dinosaurs : ScienceAlert
Thinking Hard and Long Can Cause Brain Drain : ScienceAlert
Record-Breaking Experiment Could Solve a Huge Challenge in Quantum Computing
A Common ‘Forever Chemical’ Has Just Been Linked to Liver Cancer in Humans : ScienceAlert