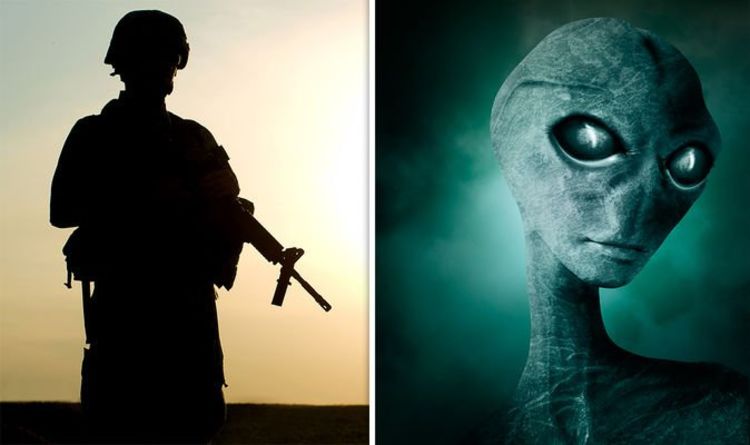 
The Air Force has already issued a stern statement after the number of people pledging to attend a Facebook event entitled Storm Area 51, They Can’t Stop All of Us, and fixed for 3am on September 20, headed towards two million. However, KM Lewis, author of a novel about Area 51 entitled The Thirteenth Guardian, said they might want to reconsider their plans. He said: “It is intended as a joke, but underneath that joke is a very deep curiosity that most people have.

“And in that deep curiosity is an amazingly huge story – a story, perhaps, whose time has finally come.

“The story is bigger than the fact that a million people want to ‘storm Area 51’. Its a far more important story – and one that, if true, the government would certainly not want anyone to find out about.

Mr Lewis, who says he has researched the subject for a decade, believes Area 51 IS the site of technology far beyond our understanding.

However, rather than what he refers to as “little green men”, he claims the “UFOs” are actually man-made flying machines built by an advanced ancient civilisation which left Earth 20,000 years ago for some unspecified reason.

He added: “That’s why the ‘approach at your own peril’ signs are posted all around Area 51.

“The government is serious about keeping everyone out.

“And, frankly, if I was a government guy tasked with maintaining an orderly progression of society, I would probably do whatever it takes to make sure no one finds the truth that they don’t even know they are searching for.

“That’s how important this knowledge is.”

The Facebook event states: “We will all meet up at the Area 51 Alien Center tourist attraction and coordinate our entry.

UFO enthusiasts have also registered their interest via the #area51raid hashtag.

Signs surrounding the site of the base, located 80 miles north-north-west of Nevada, warn against trespassing, and stress the use of “deadly force” is authorised.

In response to the surging number of people signing up for the Facebook event, US Air Force spokeswoman Laura McAndrews said last week: “Area 51 is an open training range for the US Air Force, and we would discourage anyone from trying to come into the area where we train American armed forces.

“The US Air Force always stands ready to protect America and its assets.”

Bacteria Can Use Plastic Waste as a Food Source, Which Isn’t as Good as It Sounds : ScienceAlert
Our Body Temps Have Been Dropping For 160 Years. Gut Microbes May Be Playing a Role : ScienceAlert
An Expert Explains Why The Radioactive Water Stored at Fukushima Should Be Released : ScienceAlert
Major Blow as Experimental HIV Vaccine Fails in Late Clinical Trial : ScienceAlert
This Species of Carnivorous Plant Evolved Into a Toilet And Is Now Winning at Life : ScienceAlert