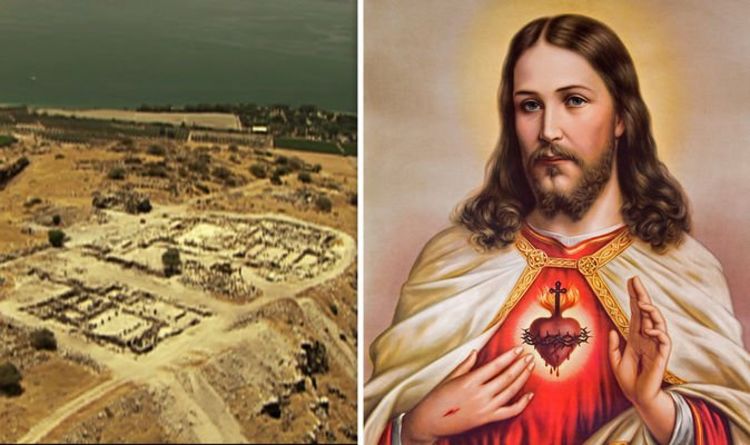 
Told by Matthew, Mark and Luke in the Gospels, the story claims Jesus crossed the Sea of Galilee by boat, when suddenly a furious storm swamped their vessel. Jesus is said to have been woken by his disciples and immediately instructed the water “Peace! Be still” to which the wind eased and the waves calmed. According to the Gospel of Mark, the boat travelled to “the land of the Gadarenes,” a destination long debated by Christians.

However, Amazon Prime’s “Decoding the Ancients” may have helped clear things up.

The narrator said in 2004: “Neither the boat, the storm, nor the description of Jesus sleeping through the powerful tempest fit this location.

“But what about the other clues mentioned in the Gospels, do any of them point to the Sea of Galilee?

“The Gospel of Mark says that Jesus travelled across the water to the land of the Gadarenes and directly on the shore was a necropolis of the dead.

“Around the lake, pilgrims point to three candidates for Jesus’ destination, claiming he sailed east.

“So one candidate for the land of the Gadarenes is a place that is today called Kursi.

“Less than nine kilometres from Capernaum, it’s the largest ancient port in the Sea of Galilee.

“Strengthening the claim is the fact that after 400 years, Christians built a monastery here marking the spot where they believed Jesus landed.”

Dr Charles Page, an archaeologist from Kursi Excavation, claimed the area is the one mentioned in the Bible.

He said: “The thing that sells it for us is we take the New Testament seriously, that Jesus came in a boat, this is the only place you can come to by boat.

“By process of elimination that’s it and the fact that the church was built tells us that this miracle happened somewhere around here.”

Octopus Brains Evolved to Share a Surprising Trait in With Our Brains : ScienceAlert
Giant Asteroid Unleashed a Devastating Martian Megatsunami, Evidence Suggests : ScienceAlert
Psychologists Found a Weird Trick That Changes How Food Tastes : ScienceAlert
Mars Once Had So Much Water, It Could Have Been An Ocean World, Scientists Say : ScienceAlert
Forests at Risk of Burning an Extra 30 Days a Year Without Climate Action : ScienceAlert