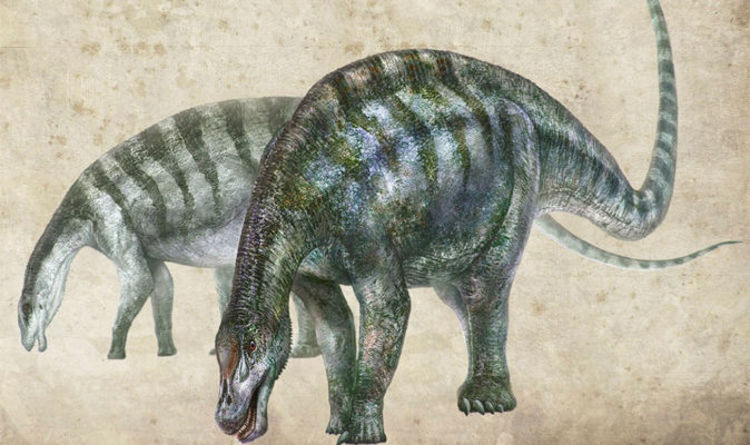 The translation of this gigantic herbivore is ‘amazing dragon from Lingwui’ – the area in China where the fossils were found.

The dinosaur, which is believed to have been about 57 feet (17.5 meters) long, is a close relative of other gentle giants including Diplodocus and Brontosaurus and would have been part of the sauropod family.

Experts discovered bones in Linqui which came from eight to 10 of the Lingwulongs, according to the study published in the journal Nature Communications.

What is significant about the findings is that it would mean that sauropods, who were believed to have emerged about 160 million years ago, is that they evolved 15 million years earlier than expected.

Study co-author Paul Upchurch, a palaeontologist at University College London, said: “Previously, we thought all of these advanced sauropods originated around 160 million years ago and rapidly diversified and spread across the planet in a time window perhaps as short as five million years.

“However, the discovery of Lingwulong means that this hypothesis is incorrect and we now have to work with the idea that, actually, this group and its major constituent lineages originated somewhat earlier and more gradually.”

Lingwulongs would have lived in a warm and wet environment which would have been full of vegetation, according to lead author Xing Xu of the Chinese Academy of Sciences.

They would have fed on plants such as conifers and ferns, and as its necks would not be as long as other sauropods it probably would have grazed on low, soft plants with its peg-like teeth.

As so many were found together, the researchers have concluded that lingwulongs were herd animals.

Previously, there have been no other findings of sauropods in East Asia as it is believed they evolved after Pangea – an ancient super continent which accounted for the majority of the land mass – had split and began forming continents as we know them today.

But as Dr Xu points out: “Our discoveries indicate that eastern Asia was still connected to other continents at the time.”

Secret Clues in Tutankhamun’s Tomb Reignite The Idea That Nefertiti Is Hidden Nearby : ScienceAlert
We May Finally Know Why Oceans in The Southern Hemisphere Are Getting So Warm : ScienceAlert
Long COVID Is Still Raising More Questions Than Answers, Say Researchers : ScienceAlert
Astronomers Think They Know The Reason For Uranus’s Kooky Off-Kilter Axis : ScienceAlert
‘Dark Data’ Is Leaving a Huge Carbon Footprint, And We Have to Do Something About It : ScienceAlert