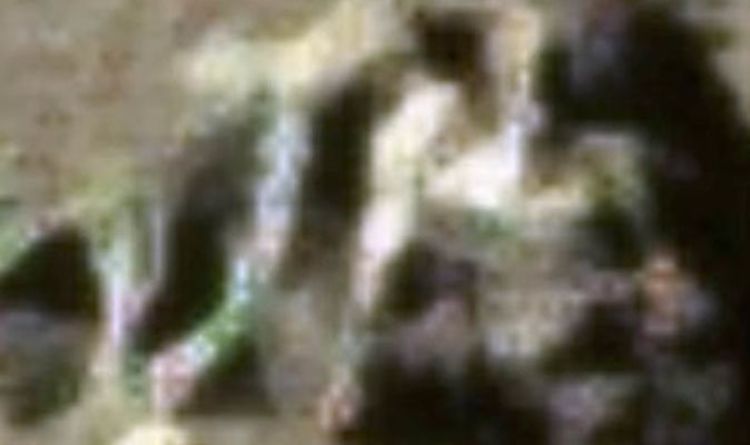 
YouTuber Streetcap1 claims to have found what could be an alien body slumped against a rock on the surface of the moon.

In his short film he posted a series of pictures taken from the Chinese lunar rover Change’e 3, which has explored and photographed the surface of the Moon.

Streetcap1 says the “body” appears to have a distinguishable face as well as a body and limbs, while lying in front of a rock.

He said: “All body parts are in the correct place here and the head looks like it is wearing a helmet with a visor.

“You can see what look like hands at the sides.

“Proportions are correct for shoulders as to the head.”

The clip has been seen more than 4,000 times since it surfaced and viewers were quick to comment their opinions on what it could be.

One wrote: “It has a cyborg look to it… very interesting and a great find.”

Another added: “It does look oddly like a humanoid figure. How many coincidences can there be..?”

However, even loyal followers of Streetcap1 said the jury was out on this one, Dailystar.co.uk reports.

One said: “Kind of reaching here bud. Don’t get me wrong, love your work, but this just looks like a rock.”

He is probably right – Streetcap1’s “body” is identical in colour to the rest of the lunar surface.

Experts may argue the findings were due to pareidolia – a phenomenon when the brain tricks the eyes into seeing familiar objects or shapes in textures or patterns like a rock surface or clouds.

Pareidolia has been responsible for hundreds of similar “discoveries” in pictures of the Moon, Mars and other planets.

However, many people do support a widespread conspiracy theory the Moon is inhabited by aliens and there are even buildings on the dark side of the celestial body.

Some claim NASA has never returned because the astronauts were warned off by hostile aliens.

We Used to Hate Commuting. Now We Realize We’ve Lost Something. : ScienceAlert
A Lost Interview With The ‘Father of The Big Bang’ Was Just Discovered : ScienceAlert
A Billion-Dollar Biotech Company Plans to Bring The Dodo Back to Life : ScienceAlert
Bar Graphs Induce a Hidden Bias in Interpretation, Experiment Shows : ScienceAlert
How a Dead Girl in Paris Wound Up With The Most-Kissed Lips in All of History : ScienceAlert